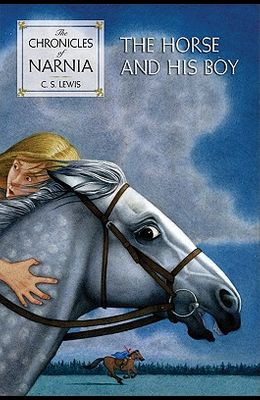 The Horse and His Boy

A beautiful hardcover edition of The Horse and His Boy , book three in the classic fantasy series, The Chronicles of Narnia . The full color jacket features art by three time Caldecott-winning artist David Wiesner and interior black-and-white illustrations by the series' original illustrator, Pauline Baynes. On a desperate journey, two runaways meet and join forces. Though they are only looking to escape their harsh and narrow lives, they soon find themselves at the center of a terrible battle. It is a battle that will decide their fate and the fate of Narnia itself. The Horse and His Boy is the third book in C. S. Lewis's classic fantasy series, which has captivated readers of all ages with magical lands and unforgettable characters for over sixty years. This is a novel that stands on its own, but if you would like to journey back to Narnia, read Prince Caspian , the fourth book in The Chronicles of Narnia .

From the Back Cover This is the story of an adventure that happened in Narnia and Calormen and the lands between, in the Golden Age when Peter was High King in Narnia and his brother and his two sisters were King and Queens under him. It is during this glorious era in Narnian history that Shasta, a young boy living in Calormen with a cruel man who claims to be his father, dreams of traveling to the unknown North. One night he overhears his 'father' offering to sell him as a slave, and Shasta decides that now is the time to begin his journey. When he meets Bree, a Talking Horse of Narnia who is a slave himself, the two decide to escape together. The pair soon encounters Aravis, a high-born girl escaping a forced marriage, and Hwin, another Talking Horse. The travelers must combine their wits and all their strength to reach the freedom they long for. And when they discover a Calormene plot to conquer Narnia, they must also race against time. The battle that ensues matches in excitement any of the adventures described in C.S. Lewis's previous two books of The Chronicles of Narnia. Assisted by the majestic Aslan, the Kings and Queens of Narnia, first introduced in The Lion, The Witch, and The Wardrobe, once again rise to the occasion to defend their kingdom.