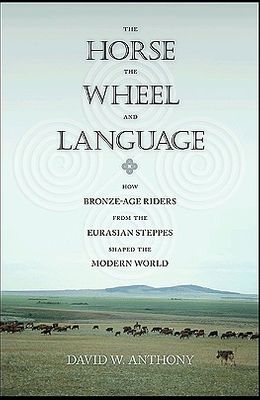 The Horse, the Wheel, and Language: How Bronze-Age Riders from the Eurasian Steppes Shaped the Modern World

Roughly half the world's population speaks languages derived from a shared linguistic source known as Proto-Indo-European. But who were the early speakers of this ancient mother tongue, and how did they manage to spread it around the globe? Until now their identity has remained a tantalizing mystery to linguists, archaeologists, and even Nazis seeking the roots of the Aryan race. The Horse, the Wheel, and Language lifts the veil that has long shrouded these original Indo-European speakers, and reveals how their domestication of horses and use of the wheel spread language and transformed civilization. Linking prehistoric archaeological remains with the development of language, David Anthony identifies the prehistoric peoples of central Eurasia's steppe grasslands as the original speakers of Proto-Indo-European, and shows how their innovative use of the ox wagon, horseback riding, and the warrior's chariot turned the Eurasian steppes into a thriving transcontinental corridor of communication, commerce, and cultural exchange. He explains how they spread their traditions and gave rise to important advances in copper mining, warfare, and patron-client political institutions, thereby ushering in an era of vibrant social change. Anthony also describes his fascinating discovery of how the wear from bits on ancient horse teeth reveals the origins of horseback riding. The Horse, the Wheel, and Language solves a puzzle that has vexed scholars for two centuries--the source of the Indo-European languages and English--and recovers a magnificent and influential civilization from the past.

From the Back Cover If you want to learn about the early origins of English and related languages, and of many of our familiar customs such as feasting on holidays and exchanging gifts, this book provides a lively and richly informed introduction. Along the way you will learn when and why horses were domesticated, when people first rode horseback, and when and why swift chariots changed the nature of warfare. --Peter S. Wells, author of The Battle that Stopped Rome A very significant contribution to the field. This book attempts to resolve the longstanding problem of Indo-European origins by providing an examination of the most relevant linguistic issues and a thorough review of the archaeological evidence. I know of no study of the Indo-European homeland that competes with it. --J. P. Mallory, Queen's University, Belfast