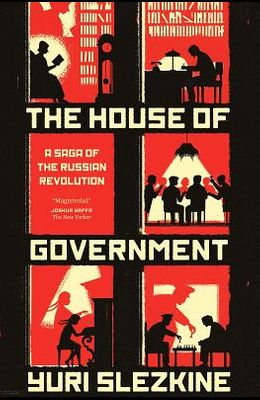 The House of Government: A Saga of the Russian Revolution

The epic story of an enormous Soviet apartment building where Communist true believers lived before their destruction The House of Government is unlike any other book about the Russian Revolution and the Soviet experiment. Written in the tradition of Tolstoy's War and Peace , Grossman's Life and Fate , and Solzhenitsyn's The Gulag Archipelago , Yuri Slezkine's gripping narrative tells the chilling true story of an enormous Moscow apartment building where Soviet leaders and their families lived until hundreds of these Bolshevik true believers were led, one by one, to prison or to their deaths in Stalin's purges. Drawing on letters, diaries, and interviews with survivors, and featuring hundreds of rare photographs, this epic story weaves together biography, literary criticism, architectural history, and fascinating new theories of revolutions, millennial prophecies, and reigns of terror. The result is an unforgettable saga of a building that, like the Soviet Union itself, became a haunted house, forever disturbed by the ghosts of the disappeared.

From the Back Cover An utterly gripping masterwork. As residents of the House of Government enjoy privileged childhoods, fall in love and marry, rise to power, betray each other, and are arrested and shot, we learn about the peculiar nature of Bolshevism and get a new history of Russia. But the book's compelling brilliance is its living organic nature--a mixture of historical narrative, novel, and family saga with echoes of Grossman, Pasternak, Solzhenitsyn, and even Tolstoy. --Simon Sebag Montefiore, author of Stalin: The Court of the Red Tsar Few books are truly visionary, but The House of Government earns this description. The cumulative effect of this massive chronicle of the Soviet era is devastating and, more important, utterly satisfying. It's a work of art in itself, a beautifully written exploration of a central phase of modern history, and one that has never seemed as terrifyingly relevant. Tolstoy himself would have recognized Yuri Slezkine as an artist, as the author of a narrative with transmogrifying power, an epic that functions on countless levels at the same time. --Jay Parini, author of The Last Station: A Novel of Tolstoy's Final Year The House of Government traces the public and personal lives of residents of a unique, elite Moscow housing complex as they evolve from fanatic Bolshevik revolutionaries--dreaming of a Marxist utopia and determined to shed blood to create it--to victims of Stalin's terror. Based on diaries, letters, memoirs, and interviews, featuring hundreds of rare photos, and combining history, biography, and social theory, this cornucopia of a book is a tour de force. --William Taubman, Pulitzer Prize-winning author of Khrushchev: The Man and His Era and Gorbachev: His Life and Times Using the House of Government as a microcosm of the rise and fall of the first generation of Soviet leaders and their utopian ideas, Yuri Slezkine's remarkable book illuminates the entire experience of Stalinism. Drawing on memoirs, letters, and literature, he lays bare the emotions of the Russian Revolution and its Bolshevik beneficiaries, from love and friendship to a commitment to the end that justified the most vicious means. Perpetrators became victims as hundreds of once-powerful residents of the House were imprisoned, exiled, tortured, and shot. The House of Government is extraordinarily ambitious, exciting, and disturbing. --Ronald Grigor Suny, author of The Soviet Experiment In this monumental study, Yuri Slezkine tells the story of the first Soviet ruling generation by looking through the windows of the remarkable building where many of them lived. Fittingly built in an area called the Swamp, the House of Government saw more than a third of its elite tenants evicted and arrested in the terror of the 1930s. Drawing on an amazing array of archives, memoirs, and interviews, Slezkine's unique narrative becomes a history of the Soviet Union itself. Nobody interested in Soviet history can afford to miss it. --J. Arch Getty, University of California, Los Angeles An incomparable masterpiece, Slezkine's account of the lives of elite Bolshevik families is as fascinating as a nineteenth-century Russian novel. He builds real drama and pathos into the stories of these people, and we find ourselves hoping against hope that they will survive. Yet this is history of the highest rigor. It would take several lifetimes for mere mortals to locate, read, and figure out what to do with the diaries, letters, notebooks, and drawings Slezkine found in the archives. This family saga heightens the tragedy of the Russian Revolution and gives the reader a quality of understanding rarely achieved by any work of history. --Lewis H. Siegelbaum, coeditor of Stalinism as a Way of Life and author of Cars for Comrades Yuri Slezkine's brilliant account of the Soviet past shifts the story away from coal and iron statistics and into Bolshevik millenarianism, Communist love lives, and the terror that enveloped a generation of leaders. A tour de force. --Robert Service, author of Lenin: A Biography Boldly conceived and brilliantly executed, The House of Government is at once a major scholarly and literary achievement. --Douglas Smith, author of Former People: The Final Days of the Russian Aristocracy