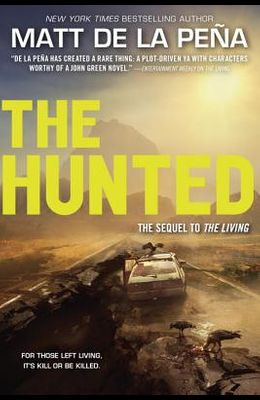 Newbery Medal-winning author Matt de la Pe a's The Hunted , the sequel to The Living, is a high-energy, action-packed survival story. De la Pe a has created a rare thing: a plot-driven YA with characters worthy of a John Green novel. -- Entertainment Weekly on The Living , A- For those left living, it's kill or be killed. When Shy pulled himself from the wreckage of the Paradise Cruise luxury liner, he met Addie. Addie was rich and blond, and with no one else to trust, she told Shy a secret she never should have revealed. It's a secret that people would kill for-- have killed for--and she has the piece that could turn everything on its ear. The problem? Shy has no idea where Addie is. Back home in California seems logical, but there are more ways to die back home than Shy could ever have guessed. And thanks to what Shy knows now, he's a moving target. Praise for The Hunted Readers will be drawn to the raw and gritty setting, fast-moving plot, and diverse characters worth rooting for. -- School and Library Journal Between the] fast-paced plot and meaningful, diverse character development, this is a great crossover for fans of both thrillers and more character-driven novels. - Booklist Praise for The Living De la Pe a has created a rare thing: a plot-driven YA with characters worthy of a John Green novel. - Entertainment Weekly , A- Action is first and foremost. . . . De la Pe a can uncork delicate but vivid scenes. -- The New York Times The Living ] is special because of its extraordinary protagonist , Shy, who I haven't been able to shake from my mind in the weeks since I read the book.-John Green, author of The Fault in Our Stars There's no way to classify The Living . It's everything I love mixed into one fantastic, relentless, action-packed story. As always with Matt, the characters are the best part. So real. I loved this book.-James Dashner, #1 New York Times bestselling author of the Maze Runner series STAR ] An addictive page-turner and character-driven literary novel with broad appeal for fans of both.- Kirkus Reviews, Starred STAR ] An excellent, enthralling ride ...a great read for those looking for adventure and survival stories.- VOYA , Starred A Pura Belpr Author Honor Award Winner An ALSC 2014 Notable Children's Book Pick

What should you read after The Hunted? Here is a list of books to read if you read and loved The Hunted