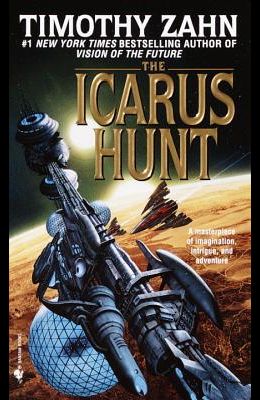 Chane Jordan is a great pilot of lousy ships, one who often takes shady side jobs to make ends meet. But he gets more than he bargained for when he agrees to fly the Icarus--an ancient freighter with no updated technology--and her special cargo. Soon Chane realizes he's in the middle of a gigantic conspiracy that could change the course of history.

From the Back Cover A Hugo Award winner, a #1 New York Times bestselling author, Timothy Zahn is one of the most popular and respected writers of speculative fiction today. In The Icarus Hunt, Zahn delivers a wild hyperspace romp through the galaxy -- a bold epic filled with unrelenting action, unforgettable characters, and a healthy dose of humor. Jordan McKell is a renegade star-freighter pilot struggling to survive in a galaxy where trade is monopolized by the oppressive Patth. But when he takes a job flying a broken-down antique ship and its special cargo to Earth, neither Jordan nor his mechanic-partner Ixil (an alien being with two ferret like outhunters linked to his neural system) has any idea of the stakes involved. Soon Jordan and Ixil find themselves lumbering through space on the Icarus with a ragtag crew, an unknown saboteur, and a large sealed container the Patth will do anything to intercept. It's not long before Jordan suspects he and Ixil are in the middle of a vast conspiracy that could change the course of human history. Unfortunately, he's right.
From the front Cover From Timothy Zahn, Hugo Award winner and New York Times bestselling author of two landmark Star Wars(R) series, comes an original new tale featuring a renegade space pilot, his unusual alien partner, and an unknown cargo that can change the course of galactic history. Jordan McKell has a problem with authority. Unfortunately for him, the iron-fisted authority of the powerful Patthaaunutth controls virtually every aspect of galactic shipping. In order to survive, Jordan ekes out a living dabbling in interstellar smuggling for outlaw concerns that represent the last vestiges of free trade in the galaxy. So when Jordan and his partner, Ixil--an alien with two ferret-like outhunters linked to his neural system--are hired by a mysterious gentleman to fly a ship and its special cargo to Earth, they jump at the job. Caution has never been one of Jordan's strong suits. But this time he may have taken on more than even he can handle. The ship, Icarus, turns out to be a ramshackle hulk, the ragtag crew literally picked up off the street, and the cargo so secret, it's sealed in a special container that takes up most of the cramped and ill-designed ship. As if that weren't bad enough, it looks like the authorities already suspect something is afoot, there's a saboteur aboard, and the Icarus appears to be shaking apart at the seams. It doesn't seem as if things could get any worse. That is, until a beautiful crew member helps McKell uncover the true nature of the cargo he's carrying. With his enemies closing in on the lumbering Icarus, the unknown saboteur still aboard, and authorities on Earth pressured to turn them in, McKell and Ixil become fugitives. Their only chance is to stayone step ahead of their pursuers as they try to make it home. A bold and epic novel filled with unrelenting action and a good dose of humor, The Icarus Hunt is a wild hyperspace romp through the galaxy.