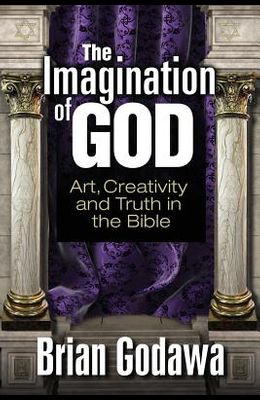 The Imagination of God: Art, Creativity and Truth in the Bible

Want to Know God More? Use Your Imagination NOTE This book was previously released with the title, Word Pictures: Knowing God Through Story and Imagination. Artist and screenwriter Brian Godawa used to revel in his ability to argue the truth of the gospel, often crushing his opponents in the process. In time, however, he began to realize that winning an argument about the logic of Christianity did not equal persuading people to follow Jesus. What was missing? Through prayer and searching the Scriptures, Godawa realized that while God cares deeply for rationality, propositional truths were not the only tools he used to reach people with his truth. In fact, Godawa discovered that story, visual images, and other kinds of art were central to God's communication style because they could go places reason could never go: into the imagination and the heart. The Bible is a Work of Art In his refreshing and challenging book, Godawa helps you break free from the spiritual suffocation of heady faith. Without negating the importance of reason and doctrine, Godawa challenges you to move from understanding the Bible literally to literarily by exploring the poetry, parables and visual images found in God's Word. Weaving historical insight, pop culture and personal narrative throughout, Godawa reveals the importance God places on imagination and creativity in the Scriptures, and provides a biblical foundation for Christians to pursue imagination, beauty, wonder and mystery in their faith. For any Christian who wants to learn how to communicate and defend the Gospel in a postmodern context, this book will help you find a path between the two extremes of intellectualized faith and anti-intellectual faith by recovering a biblical balance between intellect and imagination. Endorsements Brian Godawa is that rare breed--a philosopher/artist--who opens our eyes to the aesthetic dimension of spirituality. Cogently argued and fun to read, Godawa shows convincingly that God interacts with us as whole persons, not only through didactic teaching but also through metaphor, symbol, and sacrament. - Nancy R. Pearcey, Author, Total Truth: Liberating Christianity from its Cultural Captivity , and Saving Leonardo: A Call to Resist the Secular Assault on Mind, Morals, and Meaning Brian Godawa's book is an exploration of the literary nature of the Bible. It is a spirited and balanced defense of the imagination as a potential conveyer of truth. There is a lot of good literary theory in the book, as well as an autobiographical story line. Pervading all this wealth is a sense of the author's energetic mind. The thoroughness of research makes the book a triumph of scholarship as well. - Leland Ryken, Clyde S. Kilby Professor of English, Wheaton College, and editor of The Christian Imagination: The Practice of Faith in Literature and Writing Godawa is one of the best thinkers on Christianity, art and culture writing today. His latest work, The Imagination of God ] , encourages a much more holistic viewing of movies and TV, which in turn leads to a more complete understanding of the Word of God. His work will make you want to first reach for your Bible and then view (or, even better, make) art that engages the culture and advances the kingdom of God. He has also convinced me that I am a 'literarialist.' Read this book and you'll probably become one too. - Dean Batali, TV writer, That '70s Show and Buffy the Vampire Slayer

Frequently Asked Questions About The Imagination of God: Art, Creativity and Truth in the Bible

Books like The Imagination of God: Art, Creativity and Truth in the Bible

0
|   0  reviews
Did you read The Imagination of God: Art, Creativity and Truth in the Bible? Please provide your feedback and rating to help other readers.
Write Review

List of All Editions of The Imagination of God: Art, Creativity and Truth in the Bible