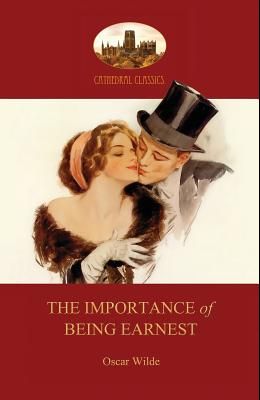 The Importance of Being Earnest: with facsimile of first-night programme (Aziloth Books)

Oscar Wilde was born in Dublin in 1854, the son of William and Lady Francesca Wilde, both noted intellectuals in the city. Educated first at Trinity College, Dublin, and then Magdalen College, Oxford, he became known as much for his wit as his flamboyant style of dress. Wilde then moved to London, settling in Chelsea in 1878, where he rubbed shoulders with the likes of George Moore, Henry James and William Butler Yeats. But commercial success proved elusive and it was not until 1891 that his novel, 'The Picture of Dorian Gray', was published. There followed a brief effulgence of genius, with the production of a series of plays, culminating in what many regard as his masterpiece, 'The Importance of Being Earnest'. The play purports to be a variety of Victorian melodrama, whose stock-in-trade of abandoned children and apparently upright citizens whose pasts hold terrible secrets, are well represented in the play. To this, Wilde added several dramatic twists - satire of marriage and prevailing social mores, and a character with no small resemblance to himself, the Dandy, whose self-deprecating style and amoral character allows Wilde to pepper the play with a blizzard of barbed and memorable epigrams on the base and venal motives underlying the shallow mask of Victorian Polite Society.

Books similiar to The Importance of Being Earnest: with facsimile of first-night programme (Aziloth Books)

List of All Editions of The Importance of Being Earnest: with facsimile of first-night programme (Aziloth Books)