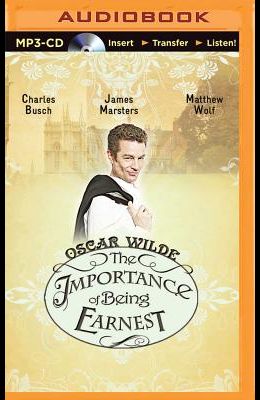 by
Oscar Wilde and Emily Bergl

This final play from the pen of Oscar Wilde is a stylish send-up of Victorian courtship and manners, complete with assumed names, mistaken lovers, and a lost handbag. Jack and Algernon are best friends, both wooing ladies who think their names are Ernest, that name which inspires absolute confidence. Wilde's effervescent wit, scathing social satire, and high farce make this one of the most cherished plays in the English language. An L.A. Theatre Works full cast performance featuring: James Marsters as Jack Charles Busch as Lady Bracknell Emily Bergl as Cecily Neil Dickson as Lane and Merriman Jill Gascoine as Miss Prism Christopher Neame as Chasuble Matthew Wolf as Algernon Sarah Zimmerman as Gwendolen Directed by Michael Hackett. Recorded before a live audience. Includes an interview with director Michael Hackett, Professor of Theater in the School of Theater, Film and Television at UCLA.