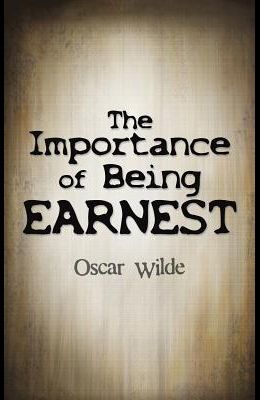 A farce, one of the best ever written, cleverly constructed and delightfully amusing. There is only the slightest attempt at the sketching of character, while most of the personages are at best but caricatures; the Wilde's skill is brought to bear chiefly upon the situations and the lines. It so happens that this farce contains more clever lines, puns, epigrams, and deft repartees than any other of modern times, but these are after all accessory. A farce may be written without these additions--it might well be pure pantomime. Wilde has thrown them in for full measure. Show Excerpt ck. That is nonsense. If I marry a charming girl like Gwendolen, and she is the only girl I ever saw in my life that I would marry, I certainly won't want to know Bunbury. Algernon. Then your wife will. You don't seem to realise, that in married life three is company and two is none. Jack. Sententiously.] That, my dear young friend, is the theory that the corrupt French Drama has been propounding for the last fifty years. Algernon. Yes; and that the happy English home has proved in half the time. Jack. For heaven's sake, don't try to be cynical. It's perfectly easy to be cynical. Algernon. My dear fellow, it isn't easy to be anything nowadays. There's such a lot of beastly competition about. The sound of an electric bell is heard.] Ah that must be Aunt Augusta. Only relatives, or creditors, ever ring in that Wagnerian manner. Now, if I get her out of the way for ten minutes, so that you can have an opportunity for proposing to Gwendolen, may I dine with you to-night at Wi

List of All Editions of The Importance of Being Earnest