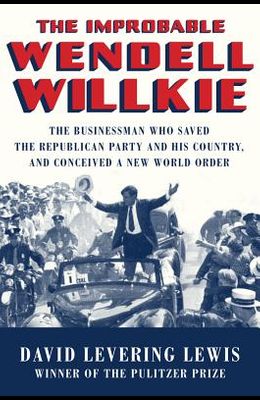 The Improbable Wendell Willkie: The Businessman Who Saved the Republican Party and His Country, and Conceived a New World Order

In the wake of one of the most tumultuous conventions in Republican history, the party of Lincoln nominated in 1940 a prominent businessman and Wall Street attorney for president. Though Wendell Willkie would lose to FDR, David Levering Lewis reveals in this news-making reclamation that the story of this Hoosier-born corporate chairman's life is the story of an America that could have been. Popular for his down-home Midwestern charm and unaffected candor, Willkie possessed a supple intellect and a concealed disdain for political opportunism that, had he not died prematurely, would have revolutionized American politics with its advocacy of bipartisanship and social responsibility. Not only was he the first presidential candidate to speak before the NAACP, advocating a civil rights movement in the 1940s, but Willkie also bucked American isolationism and became the first to champion the nation's involvement in international politics. Vibrantly recounted, The Improbable Wendell Willkie affirms the legacy of an American icon.