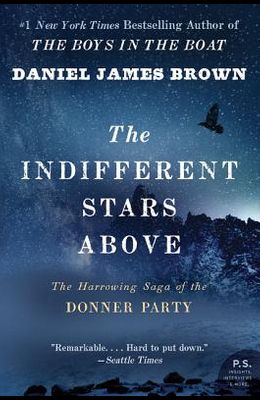 The Indifferent Stars Above: The Harrowing Saga of the Donner Party

In April of 1846, Sarah Graves, 21 years old and newly married, set out with her husband, her parents and her eight siblings; their destination was California. Seven months later, after joining a party of emigrants led by George Donner, Sarah and her family arrived at Truckee Lake in the Sierra Nevada Mountains just as the first heavy snows of the season closed the pass ahead of them. The group was trapped. On December 15, Sarah and 14 other young, healthy people set out for California on foot, hoping to get relief for the others. Over the next 32 days they endured almost unfathomable hardships and horrors. In this gripping and richly informative narrative, Daniel James Brown takes students along on every step of Sarah's journey. Brown clarifies rumors about the Donner Party and highlights just how difficult life was for the first Western pioneers. Daniel James Brown is the author of the critically acclaimed history Under a Flaming Sky: The Great Hinckley Firestorm of 1894. He has taught writing at San Jose State University and Stanford University and is the author of two textbooks on writing. Brown grew up in the San Francisco Bay Area and attended the University of California at Berkeley and UCLA. He now lives with his wife and two daughters in the country east of Redmond, Washington. A hard-to-put-down book about an event in American history that has been sensationalized, mythologized, and maligned. What Brown has done is made it understood. -- Seattle Times --Mary Roach, New York Times Book Review

From the Back Cover From the #1 bestselling author of The Boys in the Boat comes an unforgettable epic of family, tragedy, and survival on the American frontier An ideal pairing of talent and material.... Engrossing.... A deft and ambitious storyteller. - Mary Roach, New York Times Book Review In April of 1846, twenty-one-year-old Sarah Graves, intent on a better future, set out west from Illinois with her new husband, her parents, and eight siblings. Seven months later, after joining a party of pioneers led by George Donner, they reached the Sierra Nevada Mountains as the first heavy snows of the season closed the pass ahead of them. In early December, starving and desperate, Sarah and fourteen others set out for California on snowshoes, and, over the next thirty-two days, endured almost unfathomable hardships and horrors. In this gripping narrative, New York Times bestselling author Daniel James Brown sheds new light on one of the most legendary events in American history. Following every painful footstep of Sarah's journey with the Donner Party, Brown produces a tale both spellbinding and richly informative.