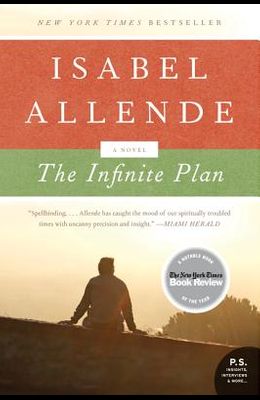 Allende is one of the most important novelists to emerge from Latin America in the past decade. -- Boston Globe Allende is a genius. -- Los Angeles Times Book Review From Isabel Allende, the beloved New York Times bestselling author of In s of My Soul, Daughter of Fortune, Portrait in Sepia , and The House of the Spirits , comes The Infinite Plan a vivid and engrossing tale of one man's search for love, and his struggle to come to terms with a childhood of poverty and neglect. Gregory Reeves' father is a self-styled preacher who wanders the American West with his family in a caravan during the 1940s, preaching The Infinite Plan, a divine vision of the meaning of life and the nature of the universe. But when the preacher falls ill, the family abandons its nomadic ways and settles in a Hispanic barrio of Los Angeles. Gregory begins a new life in a Spanish-speaking world: school (for the first time), gangs, sex, books and ideas, and work. As he explores the mysterious world of the barrio, he meets the people who will shape his future, among them Pedro and Inmaculada Morales, who become his surrogate parents and provide him with the love and security his own family cannot give him. As Gregory's story unfolds, the tides of history beckon him--persecution by gangs in the barrio, the horrors of the war in Vietnam. After his return from Vietnam, Gregory becomes a lawyer in San Francisco, where he pursues money and possessions, looks for love with the wrong women, parties, abuses alcohol, and neglects his children. Soon he is left with nothing but a choice and a past to reckon with.

From the Back Cover In The Infinite Plan , critically acclaimed, bestselling author Isabel Allende weaves a vivid and engrossing tale of one man's search for love and his struggle to come to terms with a childhood of poverty and neglect. It is the story of Gregory Reeves and his hard journey from L.A.'s Hispanic barrio to the killing fields of Vietnam to the frenetic world of a San Francisco lawyer. Along the way, he loses himself in an illusory and wrongheaded quest, and only by circling back to his roots can he find what he is missing and what he wants more than anything in life.