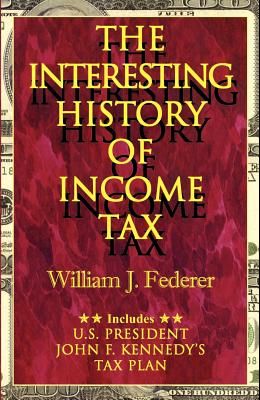 The Interesting History of Income Tax

2.7 Out of 5
We search the most popular review sites and give you one score you can trust!

The Interesting History of Income Tax William J. Federer The only things certain are death and taxes - Benjamin Franklin Yet few know America's interesting history of Income Tax, such as: *1787 - U.S. Constitution prohibited a direct Federal tax *1862 - Revenue Tax on incomes went into effect to finance the Union during the Civil War *1895 - Supreme Court made Income Tax unconstitutional *Woodrow Wilson thought tariffs on imports caused wars, so he worked to replace them with an Income Tax. *1913 - Income Tax was only a 1% tax on the top 1% richest people in America. *1943 - Paycheck Withholding began as an emergency effort to get funds to finance WWII. John F. Kennedy - Lower rates of taxation will stimulate economic activity and so raise the levels of personal and corporate income as to yield within a few years an increased flow of revenues to the Federal Government. (Annual Budget Message, Jan. 17, 1963) Thomas Jefferson - It is an encouragement to proceed as we have begun in substituting economy for taxation (2nd Annual Message, 1802) (176 pages, includes pictures)