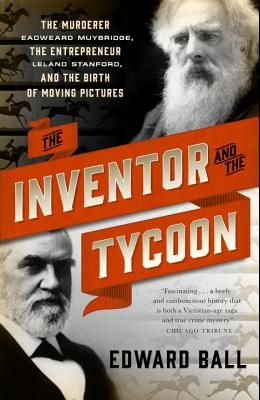 The Inventor and the Tycoon: The Murderer Eadweard Muybridge, the Entrepreneur Leland Stanford, and the Birth of Moving Pictures

A Chicago Tribune Noteworthy Book of the Year Nearly 140 years ago, in frontier California, photographer Eadweard Muybridge captured time with his camera and played it back on a flickering screen, inventing the breakthrough technology of moving pictures. Yet the visionary inventor Muybridge was also a murderer who killed coolly and meticulously, and his trial became a national sensation. Despite Muybridge's crime, the artist's patron, railroad tycoon Leland Stanford, founder of Stanford University, hired the photographer to answer the question of whether the four hooves of a running horse ever left the ground all at once--and together these two unlikely men launched the age of visual media. Written with style and passion by National Book Award-winner Edward Ball, this riveting true-crime tale of the partnership between the murderer who invented the movies and the robber baron who built the railroads puts on display the virtues and vices of the great American West.

Books similiar to The Inventor and the Tycoon: The Murderer Eadweard Muybridge, the Entrepreneur Leland Stanford, and the Birth of Moving Pictures

List of All Editions of The Inventor and the Tycoon: The Murderer Eadweard Muybridge, the Entrepreneur Leland Stanford, and the Birth of Moving Pictures