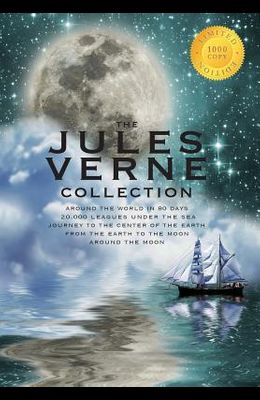 The Jules Verne Collection (5 Books in 1) Around the World in 80 Days, 20,000 Leagues Under the Sea, Journey to the Center of the Earth, From the Eart

The Jules Verne Collection includes five novels; Around the World in 80 Days, 20,000 Leagues Under the Sea, Journey to the Center of the Earth, From the Earth to the Moon, and Around the Moon. This set is limited to 1,000 copies. In Around the World in 80 Days, Jules Verne helped make the world seem a little smaller, and accessible to young adventurers, spurring many to attempt a voyage around the world. In 20,000 Leagues Under the Sea, the description of Nemo's ship, called the Nautilus, was considered ahead of its time, as it accurately describes features on submarines, which at the time were very primitive vessels. In Journey to the Center of the Earth, readers were brought face to face with prehistoric creatures deep within the bowels of the Earth. In From the Earth to the Moon, many of Verne's calculations in launching a projectile into space were surprisingly accurate, and his placement of a launch site in Florida predated the Kennedy Space Center's construction in Florida by almost 100 years. In Around the Moon, Verne describes how the gravitational force of a large asteroid can change the course of a space ship, and encouraged readers to dream about the wonders of the Moon's surface.