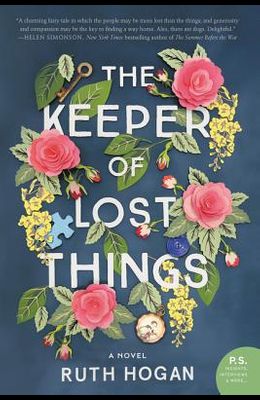 The Keeper of Lost Things

A charming, clever, and quietly moving debut novel of of endless possibilities and joyful discoveries that explores the promises we make and break, losing and finding ourselves, the objects that hold magic and meaning for our lives, and the surprising connections that bind us. Lime green plastic flower-shaped hair bobbles-- Found, on the playing field, Derrywood Park, 2nd September. Bone china cup and saucer-- Found, on a bench in Riveria Public Gardens, 31st October. Anthony Peardew is the keeper of lost things. Forty years ago, he carelessly lost a keepsake from his beloved fiancee, Therese. That very same day, she died unexpectedly. Brokenhearted, Anthony sought consolation in rescuing lost objects--the things others have dropped, misplaced, or accidently left behind--and writing stories about them. Now, in the twilight of his life, Anthony worries that he has not fully discharged his duty to reconcile all the lost things with their owners. As the end nears, he bequeaths his secret life's mission to his unsuspecting assistant, Laura, leaving her his house and and all its lost treasures, including an irritable ghost. Recovering from a bad divorce, Laura, in some ways, is one of Anthony's lost things. But when the lonely woman moves into his mansion, her life begins to change. She finds a new friend in the neighbor's quirky daughter, Sunshine, and a welcome distraction in Freddy, the rugged gardener. As the dark cloud engulfing her lifts, Laura, accompanied by her new companions, sets out to realize Anthony's last wish: reuniting his cherished lost objects with their owners. Long ago, Eunice found a trinket on the London pavement and kept it through the years. Now, with her own end drawing near, she has lost something precious--a tragic twist of fate that forces her to break a promise she once made. As the Keeper of Lost Objects, Laura holds the key to Anthony and Eunice's redemption. But can she unlock the past and make the connections that will lay their spirits to rest? Full of character, wit, and wisdom, The Keeper of Lost Things is heartwarming tale that will enchant fans of The Particular Sadness of Lemon Cake, Garden Spells, Mrs Queen Takes the Train, and The Silver Linings Playbook .

From the Back Cover Anthony Peardew is the Keeper of Lost Things. Once a celebrated author of short stories, now in his twilight years, Anthony has sought consolation from the long-ago loss of his fiancée by lovingly rescuing lost objects--the things others have dropped, misplaced, or accidently left behind. Realizing that he's running out of time, he leaves his beautiful house and all the collected treasures to his unsuspecting assistant, Laura, the one person he trusts to fulfill his legacy. Recovering from a bad divorce, Laura is in some ways one of Anthony's lost things. But when she moves into his lovely old Victorian mansion, her life suddenly begins to change. Anthony's final wishes set in motion a most serendipitous series of encounters as Laura sets out to realize Anthony's last wish: reuniting his cherished lost objects with their owners. With an unforgettable cast of characters that includes a teenage girl with special powers, a handsome gardener, a fussy ghost, and an array of irresistible four-legged friends, The Keeper of Lost Things is a heartwarming read about second chances, endless possibilities, and joyful discoveries.