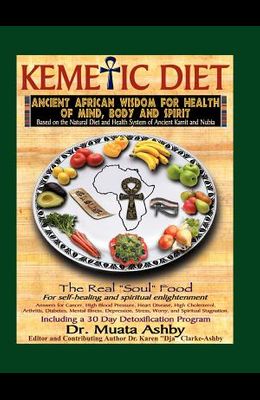 The Kemetic Diet, Food for Body, Mind and Spirit

3.THE KEMETIC DIET: GUIDE TO HEALTH, DIET AND FASTING Health issues have always been important to human beings since the beginning of time. The earliest records of history show that the art of healing was held in high esteem since the time of Ancient Egypt. In the early 20th century, medical doctors had almost attained the status of sainthood by the promotion of the idea that they alone were scientists while other healing modalities and traditional healers who did not follow the scientific method' were nothing but superstitious, ignorant charlatans who at best would take the money of their clients and at worst kill them with the unscientific snake oils and irrational theories. In the late 20th century, the failure of the modern medical establishment's ability to lead the general public to good health, promoted the move by many in society towards alternative medicine. Alternative medicine disciplines are those healing modalities which do not adhere to the philosophy of allopathic medicine. Allopathic medicine is what medical doctors practice by an large. It is the theory that disease is caused by agencies outside the body such as bacteria, viruses or physical means which affect the body. These can therefore be treated by medicines and therapies The natural healing method began in the absence of extensive technologies with the idea that all the answers for health may be found in nature or rather, the deviation from nature. Therefore, the health of the body can be restored by correcting the aberration and thereby restoring balance. This is the area that will be covered in this volume. Allopathic techniques have their place in the art of healing. However, we should not forget that the body is a grand achievement of the spirit and built into it is the capacity to maintain itself and heal itself.