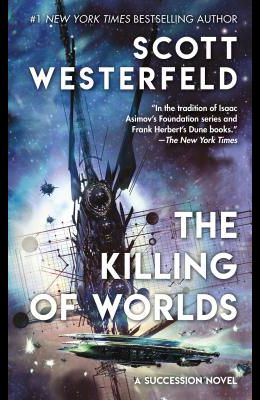 The Killing of Worlds: Book Two of Succession

Book #2 in the Succession Series
by
Scott Westerfeld

Scott Westerfeld, the acclaimed author of Fine Prey, Polymorph, and Evolution's Darling, follows T he Risen Empire with the next thrilling space opera in Succession, the Killing of Worlds. Cut off by an Imperial blockade of the planet, a Rix compound mind has guided a lone Rix commando, Herd, a single warrior backed by the intelligence of an entire planet, and pitted her against the Imperial army in a desperate attempt to break the blockade. Ten light-years away, a deadly game of political intrigue against the Emperor plays out in his war council. One senator suspects the Rix mind has found a hidden weakness, a secret so dangerous to the Emperor that he is willing to countenance the ultimate crime. . . . The killing of worlds.

From the front Cover Westerfeld creates an incredibly rich, consistently imagined far-future milieu packed with inspired transhuman civilization-building, technological foresight, and the fine attention to details, both large and small, that marks this as visionary science fiction of the highest quality. -Tony Daniel Far-future, military science fiction--with a deft hand, a conscience, a wry look back at us, and poetic flair. I know this may seem like a stretch, but think Wells. -- Paul Levinson on The Risen Empire Praise for The Risen Empire The action moves with the pace of a well-executed military operation; a fascinating clash of supertechnologies. This story has everything: combat, intrigue, politics, and even an undead cat collection. --John C. Wright In Westerfeld's hands, science fiction's cutting edge is wielded with both the precision of a surgeon's scalpel and the wild abandon of a machete. --Wil McCarthy The Risen Empire is full of relentless and addictive action which is supported by some truly wild ideas. Westerfeld's blend of traditional space opera and cutting-edge speculation makes this a truly twenty-first century SF novel. --Karl Schroeder The Risen Empire glows with sense of wonder. I loved it.-Ed Greenwood