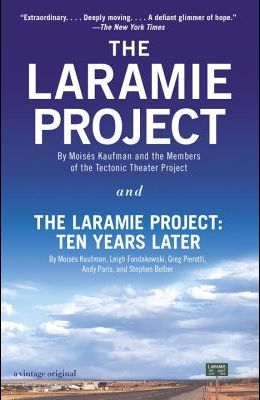 The Laramie Project, one of the most-performed theater pieces in America, has become a modern classic. In this expanded edition, it is joined by an essential and moving sequel to the original play. On October 7, 1998, a young gay man was discovered bound to a fence outside Laramie, Wyoming, savagely beaten and left to die in an act of brutality and hate that shocked the nation. Matthew Shepard's death became a national symbol of intolerance, but for the people of the town, the event was deeply personal. In the aftermath, Mois s Kaufman and members of the Tectonic Theater Project went to Laramie and conducted more than 200 interviews with its citizens. From the transcripts, the playwrights constructed an extraordinary chronicle of life in the town after the murder. In The Laramie Project: Ten Years Later, the troupe revisits the town a decade after the tragedy, finding a community grappling with its legacy and its place in history. The two plays together comprise an epic and deeply moving theatrical cycle that explores the life of an American town over the course a decade.