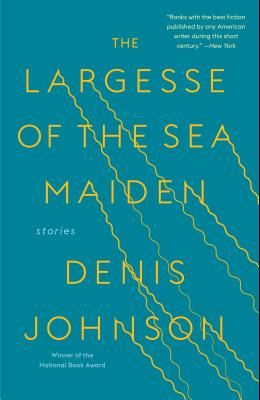 The Largesse of the Sea Maiden: Stories

Twenty-five years after Jesus' Son, a haunting new collection of short stories on mortality and transcendence, from National Book Award winner and two-time Pulitzer Prize finalist Denis Johnson NATIONAL BESTSELLER - NAMED ONE OF THE TEN BEST BOOKS OF THE YEAR BY Dwight Garner, The New York Times - Maureen Corrigan, NPR's Fresh Air - Chicago Tribune - Newsday - New York - Vulture - AV Club - Publishers Weekly Ranks with the best fiction published by any American writer during this short century.-- New York A posthumous masterpiece.-- Entertainment Weekly NAMED ONE OF THE BEST BOOKS OF THE YEAR BY The New York Times Book Review - The Washington Post - NPR - The Boston Globe - New York Public Library - Kirkus Reviews - Bloomberg The Largesse of the Sea Maiden is the long-awaited new story collection from Denis Johnson. Written in the luminous prose that made him one of the most beloved and important writers of his generation, this collection finds Johnson in new territory, contemplating the ghosts of the past and the elusive and unexpected ways the mysteries of the universe assert themselves. Finished shortly before Johnson's death, this collection is the last word from a writer whose work will live on for many years to come. Praise for The Largesse of the Sea Maiden An instant classic. -- Newsday Exceptional luminosity . . . hits a powerful vein. -- The New York Times Book Review Grace and oblivion are inextricably yoked in these transcendent stories. . . . Johnson's] gift is to extract the beauty in all that brokenness. -- The Wall Street Journal Nobody ever wrote like Denis Johnson. Nobody ever came close. . . . We're just left with this miraculous book, these perfect stories, the last words from one of the world's greatest writers. --NPR