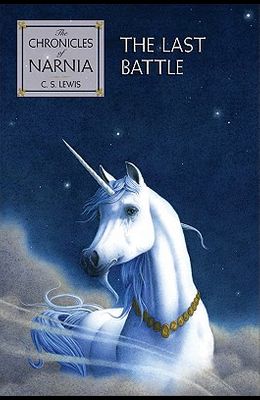 A beautiful hardcover edition of The Last Battle , book seven in the classic fantasy series, The Chronicles of Narnia . The full-color jacket features art by three time Caldecott Medal-winning illustrator, David Wiesner, and black-and-white interior art by the series' original illustrator, Pauline Baynes. During the last days of Narnia, the land faces its fiercest challenge--not an invader from without but an enemy from within. Lies and treachery have taken root, and only the king and a small band of loyal followers can prevent the destruction of all they hold dear in this, the magnificent ending to The Chronicles of Narnia . Witness the greatest of all battles in The Last Battle , is the seventh and final book in C. S. Lewis's classic fantasy series, which has been drawing readers of all ages into a magical land with unforgettable characters for over sixty years. A complete stand-alone read, but if you want to relive the adventures and find out how it began, pick up The Magician's Nephew , the first book in The Chronicles of Narnia .

From the Back Cover You look wonderful, wonderful, said the Ape. 'If anyone saw you now, they'd think you were Aslan, the Great Lion, himself.' 'That would be dreadful,' said Puzzle. 'No it wouldn't,' said Shift. 'Everyone would do whatever you told them.' During the last days of Narnia, Good King Tirian faces the fiercest challenge to any Narnian King's rule ever. Many Narnians think they have seen the great Aslan, but he doesn't behave the way they had expected. The ugly Ape who guards this false Aslan allows him to be seen for only moments at a time, and says that all Narnians have been commanded by the Lion to work for the cruel Calormenes. Many believe it is the real Aslan, and some aren't so sure; but all are afraid to disobey. Only Tirian and his small band of friends have faith that Aslan would never treat his beloved Narnians in this shameful way. They can only hope that their true hero will once again appear in time to save them all.