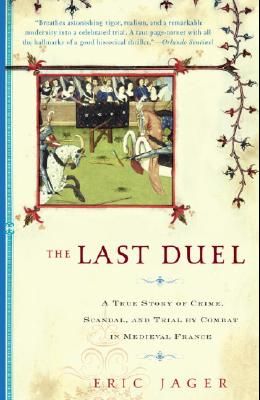 The Last Duel: A True Story of Crime, Scandal, and Trial by Combat in Medieval France

Set during the Hundred Years War, this is the gripping, atmospheric true story of the duel to end all duels in medieval France: a trial by combat pitting a knight against a squire accused of violating the knight's wife.

From the front Cover As the huge crowd seethed with pent-up excitement, the two deadly enemies studied each other intently, their breath hot behind their visors. Each sought the other's death as fire and water seek each other's annihilation. The walled field, at first a prison, now became a crucible where one man would be destroyed and the other purged in the name of justice. They would fight not only without quarter, but also without rules. And a horrible fate awaited the lady if her husband should lose . . . The gripping, atmospheric true story of the duel to end all duels in medieval France: a trial by combat pitting a knight against a squire accused of violating the knight's beautiful young wife In 1386, a few days after Christmas, a huge crowd gathers at a Paris monastery to watch the two men fight a duel to the death meant to prove which man's cause is right in God's sight. The dramatic true story of the knight, the squire, and the lady unfolds during the devastating Hundred Years War between France and England, as enemy troops pillage the land, madness haunts the French court, the Great Schism splits the Church, Muslim armies threaten Christendom, and rebellion, treachery, and plague turn the lives of all into toys of Fortune. At the heart of the tale is Jean de Carrouges, a Norman knight who returns from combat in Scotland to find his wife, Marguerite, accusing Jacques LeGris, her husband's old friend and fellow courtier, of brutally raping her. The knight takes his cause before the teenage King Charles VI, the highest judge in France. Amid LeGris's vociferous claims of innocence and doubts about the now pregnant Marguerite's charges (and about the paternity of her child), thedeadlocked court decrees a trial by combat that leaves her fate, too, in the balance. For if her husband and champion loses the duel, she will be put to death as a false accuser. Carrouges and LeGris, in full armor, eventually meet on a walled field in Paris before a massive crowd that includes the king and many nobles of the realm. A fierce fight on horseback and then on foot ensues during which both combatants suffer wounds--but only one fatal. The violent and tragic episode was notorious in its own time because of the nature of the alleged crime, the legal impasse it provoked, and the resulting trial by combat, an ancient but increasingly suspect institution that was thereafter abolished. Based on extensive research in Normandy and Paris, The Last Duel brings to life a colorful, turbulent age and three unforgettable characters caught in a fatal triangle of crime, scandal, and revenge. It is at once a moving human drama, a captivating detective story, and an engrossing work of historical intrigue.

Frequently Asked Questions About The Last Duel: A True Story of Crime, Scandal, and Trial by Combat in Medieval France

Books like The Last Duel: A True Story of Crime, Scandal, and Trial by Combat in Medieval France

0
|   0  reviews
Did you read The Last Duel: A True Story of Crime, Scandal, and Trial by Combat in Medieval France? Please provide your feedback and rating to help other readers.
Write Review

List of All Editions of The Last Duel: A True Story of Crime, Scandal, and Trial by Combat in Medieval France