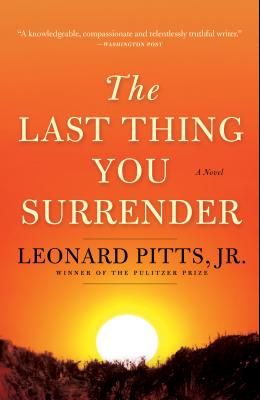 The Last Thing You Surrender: A Novel of World War II

This latest novel by Pulitzer-winning journalist and bestselling novelist ( Freeman ) Leonard Pitts, Jr., is a great American tale of race and war. Pitts offers readers a page-turning story about the enormous changes World War II triggered in America. Unfolding in three theaters of the war--the Pacific, Europe, and America's Deep South--this powerful novel is certain to challenge the way many Americans have looked at this pivotal time in US history. George Simon, a principled young Marine from an affluent white Southern family, survives serious injury at Pearl Harbor. He learns that the man who lost his own life after saving him was the estranged husband of Thelma Gordy, a young black woman from Alabama. George is sent back to the Pacific, where he is eventually taken prisoner by the Japanese. His experience of the war's horrors--both in battle and in captivity--threatens his essential humanity. Meanwhile, Thelma finds unexpected opportunity in the shipyards feeding the war effort, while her angry alcoholic brother is conscripted to fight Nazis for the country he despises. Set against a backdrop of global conflict, The Last Thing You Surrender delves deep into the personal and moral struggles that divided communities and families in an America about to transform.

Books similiar to The Last Thing You Surrender: A Novel of World War II

List of All Editions of The Last Thing You Surrender: A Novel of World War II