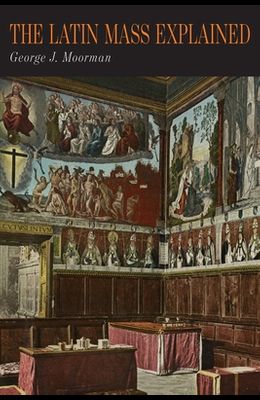 The Latin Mass Explained: Everything Needed to Understand and Appreciate the Traditional Latin Mass

Facsimile of 1920 Edition. Originally published with the title: The Mass: The Eucharistic Service of the Catholic Church... The term Latin Mass is frequently used to denote the Tridentine Mass, that is, the Roman Rite liturgy of the Mass celebrated in Latin and in accordance with the successive editions of the Roman Missal published between 1570 and 1962. Neither the Second Vatican Council nor the subsequent revision of the Roman Missal abolished Latin as the liturgical language of the Roman Rite: the official text of the Roman Missal, on which translations into vernacular languages are to be based, continues to be in Latin, and Latin can still be used in the celebration. The author attempts to explain the rituals and symbolism of the Latin Mass in part to explain its mysteries and also to encourage participation. The Latin Mass Explained made the Traditional Latin Mass really come alive for me. This book helps me tremendously when I explain my love for the Tridentine Mass to both Catholics and non-Catholics. It also helped me impart this love and understanding to my 10-year-old son, who now serves the Latin Mass. --M. Pluta This book is ideal for priests and lay people who want to learn how to pray the traditional Latin Mass, now called the Extraordinary Form of the Roman Rite. --Rev. Kenneth Baker, S.J. Homiletic and Pastoral Review This is a must read for any Catholic especially for those who want to understand the Rite of St. Gregory the Great.....or the Extraordinary Form of the Holy Mass. Classic book, read it, study it, read it again, study it again...and keep for reference. Amazon Reader