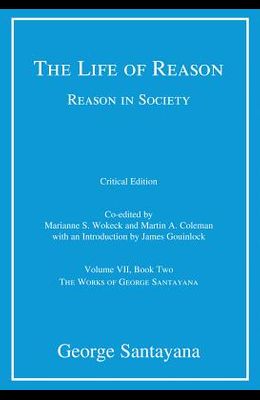 The Life of Reason or the Phases of Human Progress, Book Two: Reason in Society

by
George Santayana and Marianne S Wokeck and Martin A Coleman

The second of five books of one of the greatest works in modern philosophical naturalism. Santayana's Life of Reason , published in five books from 1905 to 1906, ranks as one of the greatest works in modern philosophical naturalism. Acknowledging the natural material bases of human life, Santayana traces the development of the human capacity for appreciating and cultivating the ideal. It is a capacity he exhibits as he articulates a continuity running through animal impulse, practical intelligence, and ideal harmony in reason, society, art, religion, and science. The work is an exquisitely rendered vision of human life lived sanely. In this second book, Santayana analyzes several distinctive forms of human association, from political and economic orders to forms of friendship, to determine what possibilities they provide for the life of reason. He considers, among other topics, love and the affinity for the ideal, the family, aristocracy and democracy, the constituents of genuinely free friendship (including that of husband and wife), patriotism, and the ideal society of kindred spirits. This Critical Edition, volume VII of The Works of George Santayana , includes a chronology, notes, bibliography, textual commentary, lists of variants, and other tools useful to Santayana scholars. The other four books of the volume include Reason in Common Sense, Reason in Religion, Reason in Ar t, and Reason in Science .