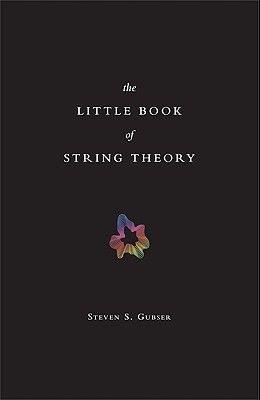 The Little Book of String Theory

The essential beginner's guide to string theory The Little Book of String Theory offers a short, accessible, and entertaining introduction to one of the most talked-about areas of physics today. String theory has been called the theory of everything. It seeks to describe all the fundamental forces of nature. It encompasses gravity and quantum mechanics in one unifying theory. But it is unproven and fraught with controversy. After reading this book, you'll be able to draw your own conclusions about string theory. Steve Gubser begins by explaining Einstein's famous equation E = mc2 , quantum mechanics, and black holes. He then gives readers a crash course in string theory and the core ideas behind it. In plain English and with a minimum of mathematics, Gubser covers strings, branes, string dualities, extra dimensions, curved spacetime, quantum fluctuations, symmetry, and supersymmetry. He describes efforts to link string theory to experimental physics and uses analogies that nonscientists can understand. How does Chopin's Fantasie-Impromptu relate to quantum mechanics? What would it be like to fall into a black hole? Why is dancing a waltz similar to contemplating a string duality? Find out in the pages of this book. The Little Book of String Theory is the essential, most up-to-date beginner's guide to this elegant, multidimensional field of physics.

From the Back Cover This is an engaging and concise introduction to the main ideas in string theory. Gubser gives us a quick tour of the basic laws of physics as we understand them today, and then demonstrates how string theory seeks to go beyond them. He serves as an artful and attentive guide, as the reader explores the mysteries of quantum mechanics, black holes, strings, branes, supersymmetry, and extra dimensions in the pages of this book. --Juan Maldacena, Institute for Advanced Study Steve Gubser has written an engaging and thought-provoking account of what was achieved in physics in the last century and how physicists are seeking to go farther in the ambitious framework known as string theory. This is one of the most thoughtful books on this much-discussed topic, and readers will find much to ponder. --Edward Witten, Institute for Advanced Study This book offers a very nice short introduction to some of the basic ideas and implications of string theory. Gubser knows his subject. --John H. Schwarz, coauthor of Special Relativity: From Einstein to Strings