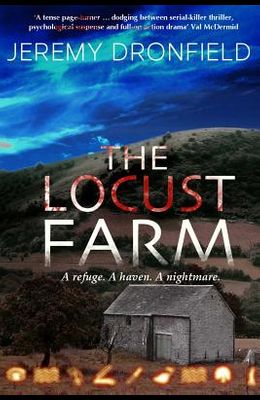 A refuge. A haven. A nightmare. Carole Perceval lives alone on a remote Yorkshire farm, trying to forget a painful past in the solitude of the moors. Her life is one of tranquil routine, until one rain-swept night, a dishevelled figure appears out of the darkness, hammering on her door. Lost and confused, the man has no memory, no idea who he is. His only certainty is that he is being pursued, that he has to escape at all costs. Exhausted, desperate, the farm is his final refuge. At first terrified, Carole finds something in this enigmatic stranger that answers a deep-seated need of her own. The man she calls Steven represents a chance to exorcise her demons, and to heal her own wounds by helping someone else to become whole again. For Steven, Carole's unconditional trust provides a haven from the lethal, implacable forces he believes are intent on destroying him. Both of them dream of escape. Of change. Of redemption. And both are about to step into a nightmare ... 'A tense page-turner... dodging between serial-killer thriller, psychological suspense and full-on action drama' Val McDermid 'A psychological suspense novel with a tour de force ending it would take thumb screws to make me divulge' Mark Timlin 'Dronfield unpeels the mysterious layers with great skill and has a real gift for atmosphere. The ending will take your breath away' The Mirror 'A sophisticated thriller in the tradition of Barbara Vine ... The novel bears similarities to Misery by Stephen King ... Reading the two works back to back, one can't help but draw parallels between them, and wonder just how good Dronfield will be in 10 years time if he's as good as King now' Big Issue 'A refreshingly dense psychological thriller' Daily Mail 'Baffling, terrifying and irresistible ... The Locust Farm will hold you in its sinister grip to the last page' Jill Paton Walsh 'A dark, highly suspenseful thriller from page one right through to the dramatic ending' The Bookseller (1998) 'Excellent descriptive passages and plenty of suspense, with realistic characters. Highly rated' The Bookseller (1999) 'This rather sinister thriller has the lot ... murder, mayhem and a whole basket of red herrings. A thoroughly enjoyable book not to be read while in the house alone' Bradford Telegraph