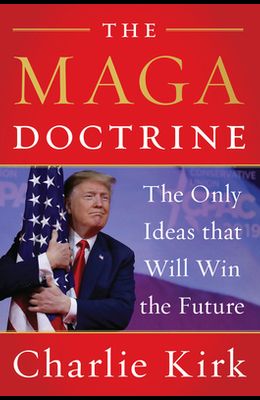 The MAGA Doctrine: The Only Ideas That Will Win the Future

The founder of Turning Point USA and social media superstar Charlie Kirk lays out the principles that underlie Trump Republicanism, define Make America Great Again and will guide the future of a new Republican Party. Donald Trump has upended what it means to be a conservative by listening to the base of the party. The left and the media claim that President Trump and those supporters operate on mindless emotion and gut instinct. Nothing could be farther from the truth. As Charlie Kirk's The MAGA Doctrine lays out, Trumpism represents an overdue restoration of self-rule by people long taken for granted by their rulers. Dismissed as deplorables by the mainstream media, Trump supporters are defending philosophical ideas which stretch back to the American founding and the birth of democracy in ancient Greece. Americans are not destroying the international system. The international system has been destroying America. Nationalism--placed in the broader context of loyalty to Western Civilization--is the only response to the menace of globalists who want to erase borders and forget the national traits that made America great. As the mainstream media keep churning out lies about Trump and his agenda, Kirk responds with a perfectly coherent set of ideas that will enable young conservatives to fight back against liberal lies pervading our airwaves and institutions. It's the only thing that will make America great again. As aggressive and edgy as the president himself, The MAGA Doctrine is both a rallying cry and a roadmap for the only ideas that will put America back on the path of greatness.