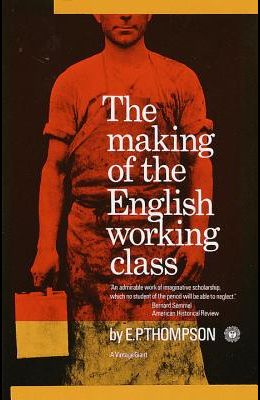 The Making of the English Working Class

A seminal text on the history of the working class by one of the most important intellectuals of the twentieth century. During the formative years of the Industrial Revolution, English workers and artisans claimed a place in society that would shape the following centuries. But the capitalist elite did not form the working class--the workers shaped their own creations, developing a shared identity in the process. Despite their lack of power and the indignity forced upon them by the upper classes, the working class emerged as England's greatest cultural and political force. Crucial to contemporary trends in all aspects of society, at the turn of the nineteenth century, these workers united into the class that we recognize all across the Western world today. E.P. Thompson's magnum opus, The Making of the English Working Class defined early twentieth-century English social and economic history, leading many to consider him Britain's greatest postwar historian. Its publication in 1963 was highly controversial in academia, but the work has become one of the most influential social commentaries every written.

From the Back Cover 'This is an active, valuing history, and its many clear judgments constitute an important challenge to many kinds of contemporary orthodoxy.' --The Listener
From the front Cover Thompson's book has been called controversial, but perhaps only because so many have forgotten how explosive England was during the Regency and the early reign of Victoria. Without any reservation, The Making of the English Working Class is the most important study of those days since the classic work of the Hammonds.--Commentary Mr. Thompson's deeply human imagination and controlled passion help us to recapture the agonies, heroisms and illusions of the working class as it made itself. No one interested in the history of the English people should fail to read his book.--London Times Literary Supplement

Books similiar to The Making of the English Working Class