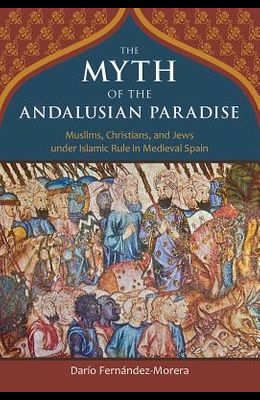 The Myth of the Andalusian Paradise: Muslims, Christians, and Jews Under Islamic Rule in Medieval Spain

A finalist for World Magazine's Book of the Year Essential reading. -- Antonio Carreno , Brown University A watershed in scholarship. -- Raphael Israeli , Hebrew University of Jerusalem Desperately, desperately needed as a counter to the mythology that pervades academia on this subject. -- Paul F. Crawford , California University of Pennsylvania An intelligent reinterpretation of a supposed paradise of convivencia . -- Julia Pavon Benito , University of Navarra A splendid book . . . Must-reading. -- Noel Valis , Yale University I am in awe of The Myth of the Andalusian Paradise . -- FrontPage Magazine A bracing remedy to a good deal of the academic pabulum that passes for scholarship. -- Middle East Quarterly An exhilarating and unput-downable read. -- Standpoint Scholars, journalists, and even politicians uphold Muslim-ruled medieval Spain--al-Andalus--as a multicultural paradise, a place where Muslims, Christians, and Jews lived in harmony. There is only one problem with this widely accepted account: it is a myth . In this groundbreaking book, Northwestern University scholar Dario Fernandez-Morera tells the full story of Islamic Spain. The Myth of the Andalusian Paradise shines light on hidden history by drawing on an abundance of primary sources that scholars have ignored, as well as archaeological evidence only recently unearthed. This supposed beacon of peaceful coexistence began, of course, with the Islamic Caliphate's conquest of Spain. Far from a land of religious tolerance, Islamic Spain was marked by religious and therefore cultural repression in all areas of life and the marginalization of Christians and other groups--all this in the service of social control by autocratic rulers and a class of religious authorities. The Myth of the Andalusian Paradise provides a desperately needed reassessment of medieval Spain. As professors, politicians, and pundits continue to celebrate Islamic Spain for its multiculturalism and diversity, Fernandez-Morera sets the historical record straight--showing that a politically useful myth is a myth nonetheless.