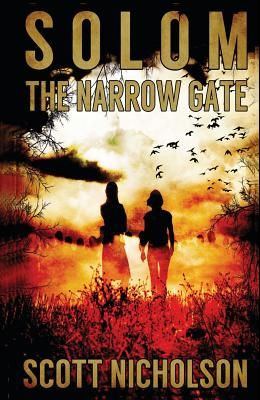 Book #2 in the Solom Series
by
Scott Nicholson

Like Stephen King, he knows how to summon serious scares. - Bentley Little, The Burning Scott Nicholson knows the territory. Follow him at your own risk. -- Stewart O'Nan, A Face in the Crowd SOLOM: THE NARROW GATE Book #2 in the Solom series After the violent death of Katy Logan's psychopathic husband, she inherits a farm in the Appalachian Mountain town of Solom. Determined to protect her teen daughter Jett and not surrender to fear, she builds a new life in the wake of the tragedy. However, the dark forces that drove her husband to madness still lurk in Solom, and a horseback preacher has returned from the grave with a sinister mission. Solom's slumbering spirits are stirring, the herds of goats are restless, and the townspeople are banding together to ward off the sinister force that threatens to destroy them. Katy and Jett discover an unexpected ally as they are drawn into the supernatural showdown, but is anyone--or anything--powerful enough to walk away from Solom's final battleground? ---------------- Scott Nicholson is the international bestselling author of more than 30 books, including THE RED CHURCH, McFALL, DRUMMER BOY, LIQUID FEAR, and SPEED DATING WITH THE DEAD. Look for the other books in the Solom series, THE SCARECROW and THE PREACHER.