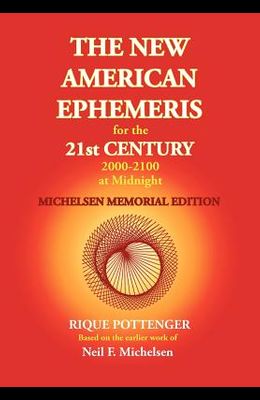 The New American Ephemeris for the 21st Century 2000-2100 at Midnight, Michelsen Memorial Edition

The New American Ephemeris for the 21st Century 2000-2100 at Midnight, Michelsen Memorial Edition Compiled and Programmed by Rique Pottenger, based on the earlier work of Neil F Michelsen Memorial text and Introduction compiled and written by Maria Kay Simms In 1976, Neil F Michelsen (1931-1990) compiled, programmed and published the first edition of The American Ephemeris that set new standards of accuracy for contemporary astrology. In 2006, celebrating the 30th anniversary of first publication of the first volume of work that grew to become Michelsen's comprehensive American Ephemeris series, Rique Pottenger continued the work that Neil began. Within The New American Ephemeris for the 21st Century 2000-2100 at Midnight is the familiar data and format long used and trusted by astrologers worldwide, now updated and expanded, with new features. This ephemeris is unique among others in the series for its memorial text section that documents, partially from excerpts from Michelsen's own writing, and partially from testimonials of colleagues, a history of the development of computer technology for astrology. Features of this entire 21st century edition include improvements in the computer generating program that enable finding double ingresses in a single day plus more accurate station times. Ceres, the asteroid that was elevated to planetary status by the IAU (International Astronomical Union) in 2006, has been added to the daily longitude listings in her position between Mars and Jupiter. The new planet Eris, whose discovery precipitated the IAU decisions of 2006, moves, at most, about 3 minutes per month, so her position is listed once per month in the Astro Data box, along with monthly positions for Chiron, Pallas, Juno and Vesta. A new formula increases the accuracy of monthly positions of the Galactic Center. Phenomena listed in the Astro Data column are sorted by time as well as by date. Also, the planetary ingress data includes R if the planet is retrograde when it ingresses.