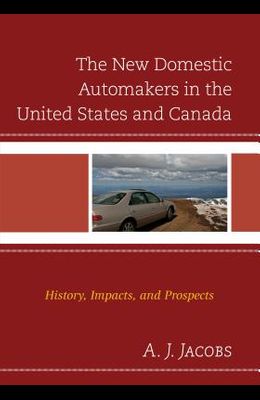 The New Domestic Automakers in the United States and Canada: History, Impacts, and Prospects

by
A J Jacobs

Over the past forty years, state/provincial and local governments in the United States and Canada have provided foreign automakers with approximately $4.80 billion in incentives in order to lure light vehicles assembly plants to their areas. This has included tax abatements, infrastructure construction, land giveaways, job training programs, and other subsidies. As of early 2015, ten foreign vehicle makers operated 20 light vehicles in developed North America. Despite the fact that all ten of these automakers have pursued a similar pattern first exporting vehicles into the United States and Canada before launching vehicle plants in developed North America each has followed its own specific historical development path and has created its own unique growth trajectory.This book provides a unique historical and qualitative review of these ten vehicle makers, from their early beginnings to their export entry into the United States and/or Canada through early 2015. In addition, it chronicles the histories of more than a dozen former automakers and potential future foreign light motor vehicle assembly plants in the United States and Canada. This includes the first foreign automaker to build its cars in the United States, De Dion-Bouton of France in July 1900, the early 20th Century endeavors of Fiat, Mercedes, and Rolls Royce, and the present day hopes of Chinese and Indian automakers. In the process, the text also provides an assessment of the top competing states and sites for any future plants, the possible incentives packages governments may offer to attract such facilities, and an estimated incentive value for each automaker. Overall, the goal of this book is to expand the knowledge of policymakers at all tiers of government in the United States and Canada and to help them take a more holistic look at the pros and cons of attracting Automobile Manufacturing FDI. It is hoped that this will enable them to make more informed decisions when pursuing a new foreign motor vehicle assembly plant. Its findings should also prove informative to urban and regional planning, political science, sociology, economics, labor, and international development scholars and students in North America and worldwide.