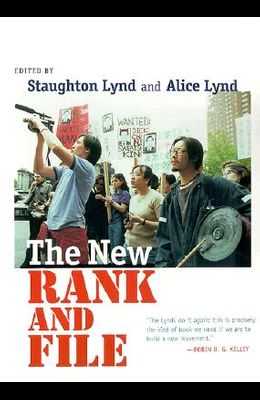 The New Rank and File: The Nature and Challenges of Emerging Employment Arrangements

by
and Staughton Lynd and Alice Lynd
$40.98
Select Format

Much has changed for workers in the years since Staughton and Alice Lynd's classic Rank and File: Personal Histories by Working-Class Organizers was first published in 1973. The New Rank and File presents interviews with working-class organizers of the 1970s, 1980s, and 1990s who face the challenges of a new economy with the same determination and creativity shown by those profiled in the earlier book. Reflecting the increasing globalization of labor practices--and problems--The New Rank and File contains oral histories of workers in Guatemala, Palestine, Nicaragua, Mexico, and Canada, as well as the United States.In their narratives, rank-and-file workers from many different industries and workplaces reveal the specific incidents and pervasive injustices that triggered their activism. They discuss the frustrations they faced in attempting to effect change through traditional means, and the ways in which they have learned to advocate through innovation. In an incisive introduction, the Lynds set forth their distinctive perspective on the labor movement, with a focus on solidarity unionism: making decisions on the assumption that we all may be leaders at one time or another rather than relying on static hierarchies. Their insights, along with true stories told in the organizers' own words, contain much to inspire a new generation of workers and activists.Jim BrophyTony BudakAndrea CarneyChinese Staff and Workers' AssociationCoalition of University EmployeesBill DiPietroKay EisenhowerRich FeldmanThe Frente Autentico del TrabajoMarshall GanzMia GiuntaMartin GlabermanMayra GuillenThe Hebron Union of Workers and General Service PersonnelHugo HernandezMargaret KeithElly LearyEd MannCharlie McCollesterVirginia RomanVicky StarrGary StevensonMike StoutManuela Aju TambrizJames TrevathanTriState Conference on SteelMauricio VallejosWorkers for Ford in Mexico

List of All Editions of The New Rank and File: The Nature and Challenges of Emerging Employment Arrangements