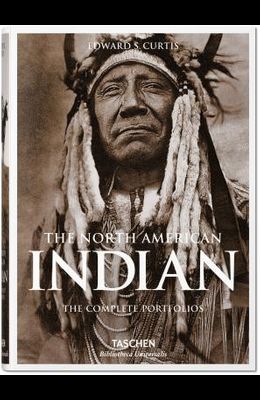 In search of a lost time: The complete portfolios by Edward S. Curtis on Native Americans At the turn of the 20th century, the American photographer Edward Sheriff Curtis (1868-1952) started on his 30-year project to produce a monumental study of North American Indians. Using an approach that was both artistically and scientifically ambitious, he recorded, in words and pictures, the traces of the traditional Indian way of life that was already beginning to die out. With tireless personal commitment Curtis visited 80 American Indian tribes from the Mexican border to the Bering Strait , gaining their confidence through his patience and sensitivity. His work was printed in 20 volumes between 1907 and 1930 as The North American Indian , but with only 272 copies, originals became extremely rare. This book gathers Curtis' entire American Indian portfolio into one publication, offering renewed access to and appreciation of his extraordinary achievement, which is as much a precious historical document as a triumph of the photographic form. About the Series: Bibliotheca Universalis -- Compact cultural companions celebrating the eclectic TASCHEN universe at an unbeatable, democratic price Since we started our work as cultural archaeologists in 1980, the name TASCHEN has become synonymous with accessible, open-minded publishing. Bibliotheca Universalis brings together nearly 100 of our all-time favorite titles in a neat new format so you can curate your own affordable library of art, anthropology, and aphrodisia. Bookworm's delight -- never bore, always excite

Books similiar to The North American Indian. the Complete Portfolios

List of All Editions of The North American Indian. the Complete Portfolios