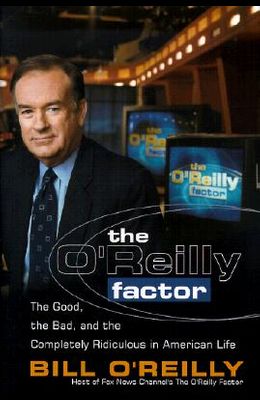 The O'Reilly Factor: The Good, the Bad and the Completely Rediculous in American Life

A hard-hitting and no-holds-barred broadside from the anchorman of the Fox News Channel's The O'Reilly Factor --what's good about America (plenty), what's bad(plenty still), and what's completely ridiculous (most everything else). Every night on the Fox News Channel, Bill O'Reilly tells it like it is. The O'Reilly Factor is the fastest-growing cable news program--and that's because O'Reilly leaves no stone unturned in his quest to reveal the truth about the state of America. It doesn't matter if you're a Hollywood movie star, or a Washington insider, or Joe Blow from Massapequa--when you come up against O'Reilly, you better get your story straight. Here, for the first time on paper, is O'Reilly's take on our country, our politicians, our celebrities, our class system, our love lives, our money. In fact, O'Reilly's got an opinion on just about everything, and he's holding nothing back: O'Reilly on class: A mind is a terrible thing to waste if you're held back by race, or gender. It is just as great a waste when you're held back by class. Right, Reverend Jackson? O'Reilly on Martha Stewart: While she masquerades as a paragon of good taste, she has turned herself into a snooty, condescending mogul . . . She's a first-rate con artist. O'Reilly on money: The true heroes of America are not the new Internet billionaires or the overpaid sports stars. The true heroes are the men, women, and teenagers who go to work for a modest wage, fulfill their responsibilities, and are kind and generous to others. O'Reilly on Al Sharpton and David Duke: These two are the most ridiculous racial demagogues in the entire U.S.A. If God has a sense of humor, they will be sharing a sauna in the netherworld. With one thermostat. O'Reilly on sex: It's time that we all lighten up about sex and keep our sexual activities where they belong: in the privacy of the bedroom or the hot tub, or in the case of Pamela Anderson, on the Internet. Mixing fascinating stories from his life both on- and off-screen with his explosive views on what's up with America, and how we can fix it, The O'Reilly Factor will ruffle your feathers, make you laugh, and make you think.

List of All Editions of The O'Reilly Factor: The Good, the Bad and the Completely Rediculous in American Life