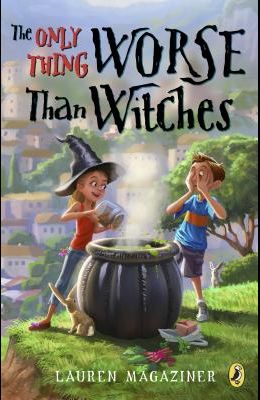 The Only Thing Worse Than Witches

Roald Dahl meets Eva Ibbotson in this hilarious middle grade debut * Fifth-grader Rupert Campbell lives in a world that combines Roald Dahl's Witches and Louis Sachar's Wayside School . Readers will banish themselves from the ordinary world to finish this book in a flash. --Kirkus Reviews, starred review Rupert Campbell is fascinated by the witches who live nearby. He dreams of broomstick tours and souvenir potions, but the closest he can get to a witchy experience is sitting in class with his awful teacher Mrs. Frabbleknacker, who smells like bellybutton lint and forbids Rupert's classmates from talking to each other before, during, and after class. So when he sees an ad to become a witch's apprentice, Rupert simply can't resist applying. But Witchling Two isn't exactly what Rupert expected. With a hankering for lollipops and the magical aptitude of a toad, she needs all the help she can get to pass her exams and become a full-fledged witch. She's determined to help Rupert stand up to dreadful Mrs. Frabbleknacker too, but the witchling's magic will be as useful as a clump of seaweed unless Rupert can figure out a way to help her improve her spellcasting--and fast