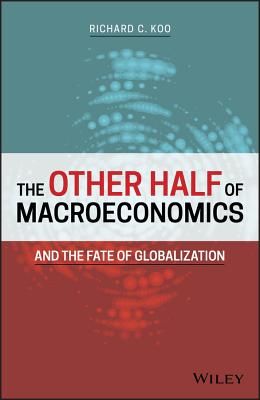 The Other Half of Macroeconomics and the Fate of Globalization

Get a new perspective from the 'other half' of macroeconomics The failure of the vast majority of economists in government, academia and the private sector to predict either the post-2008 Great Recession or the degree of its severity has raised serious credibility issues for the profession. The repeated failures of central banks and other policymakers in all advanced countries to meet their inflation or growth targets in spite of astronomical monetary easing, have left the public rightfully suspicious of the establishment and its economists. The Other Half of Macroeconomics and the Fate of Globalization elucidates what was missing in economics all along and what changes are needed to make the profession relevant to the economic challenges of today. Once the other half of macroeconomics is understood both as a post-bubble phenomenon and as a phase of post-industrial economies, it should be possible for policy makers to devise appropriate measures to overcome difficulties advanced countries are facing today such as stagnation and income inequality. - Shows how it's possible to devise appropriate policy response to slow wage and productivity growth in these economies - Demonstrates that the effectiveness of monetary and fiscal policy changes as an economy undergoes different stages of development - Argues that tax rules, regulations and even educational system must be revised to match the need of pursued (by emerging nations) countries - Explains the 200-year process of economic development and where that process is taking all of us Inside, Richard C. Koo offers a completely new way of looking at the economic predicament of advanced countries today.

From the Back Cover PRAISE FOR THE OTHER HALF OF MACROECONOMICS Richard Koo has had some of the most important economic ideas of the last two decades. This book extends his important perspective to a wider range of long-run issues. Koo's arguments deserve the attention of everyone who cares about achieving strong sustained economic growth in the industrial world. --Lawrence H. Summers, Charles W. Eliot University Professor, Harvard University Richard Koo is the most important economist of our time because he alone has devised a revolutionary framework that accurately explains the global economic crisis. His work is revolutionary not because it overthrows all the economic theory that preceded it, but rather because it completes it. Koo's policy prescriptions offer the world the best chance of restoring prosperity before this economic crisis becomes a political crisis and then a geopolitical crisis. The sooner our policymakers understand the implications of this extraordinary book--and act upon them--the safer we all will be. --Richard Duncan, Author, The Dollar Crisis; Publisher, Macro Watch Richard Koo is one of the most astute analysts of macroeconomic policies, showing that only fiscal policy is effective in balance sheet recessions. He now expands his view to the world economy and the history of advanced countries' economic development, arguing that fiscal expansion is the only effective macroeconomic policy for the foreseeable future. But instead of John Maynard Keynes' suggestion that burying money and digging it up helps, he argues forcibly that socially productive investments are needed for advanced economies to keep up with emerging ones. --Peter Temin, M.I.T.; Author, The Vanishing Middle Class: Prejudice and Power in a Dual Economy (2017) In the wake of the Great Recession, Richard Koo challenges us in his latest book to look at 'the other half of macroeconomics, ' one in which the primary concern of the private sector is to 'minimize debt' rather than 'maximize profit.' Koo brings a wealth of knowledge and real-world experience working in both the U.S. and East Asia to his discussion of the stages of economic development. I find his examples from Japan and China especially compelling. I warmly recommend this book. --Axel Leijonhufvud, Professor Emeritus, UCLA and University of Trento, Italy Richard Koo's The Other Half of Macroeconomics and the Fate of Globalization will soon rival Piketty's Capital as the economics book to-date of our century. Koo's book, as its title suggests, divides in half. The first, like John Maynard Keynes' The General Theory , deeply subverts traditional economic theory. The second, like Karl Polanyi's The Great Transformation , sets out a new analysis of recent economic history and maps a new fork in the road to humankind's future. Except for dogmatists and anti-humanitarians, it is required reading. --Edward Fullbrook, Founder, World Economics Association; Editor, Real-World Economics Review Anyone who has a deep interest in globalization should read this book. It is at one time thoughtful, analytical, original, policy-relevant and highly engaging. --Jeffrey E. Garten, Dean and Professor Emeritus, Yale University School of Management The Great Depression produced Keynes, and the Great Recession produced Koo. With this book, he not only ushers economic analysis into the 21st century but also goes back centuries to show what has been missing in economics all along. This highly accessible book contains new insights worthy of a Nobel Prize. --Shousaku Murayama, CEO, iPS Academia Japan, Kyoto University; former Research Director, Bank of Japan
From the front Cover An entirely new approach to analyzing the economic problems of today's advanced countries, from a leading economist The Other Half of Macroeconomics and the Fate of Globalization presents a totally new approach to macroeconomics that offers a solution to the challenges of stagnation and worsening inequality that trouble so many advanced countries. Since the Great Recession of 2008, most of the developed world has been mired in stagnation. The repeated failures of central banks and governments to meet inflation or growth targets despite truly exorbitant levels of monetary accommodation have left the public justifiably suspicious of the establishment and its economists. Richard C. Koo, a noted thought leader in economics and creator of the concept of balance sheet recessions - which triggered the current focus on debt in global policy debate-introduces the insightful new concept of pursued economies in this book. This concept shows that the effectiveness of monetary and fiscal policy changes as an economy undergoes different stages of development. It also identifies the core drivers of the economic and political predicaments advanced nations face today and shows how these countries can move forward in the new global environment.