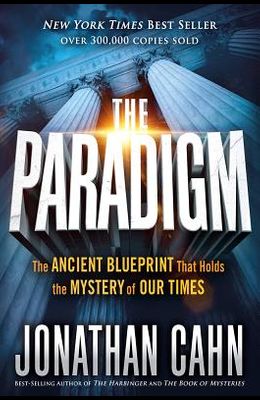 The Paradigm: The Ancient Blueprint That Holds the Mystery of Our Times

NEW YORK TIMES BEST SELLER INSTANT NATIONAL BEST SELLER Debuted at No. 5 on the New York Times Best Seller list, as well as at No. 5 on Wall Street Journal and No. 6 on the Publisher's Weekly lists. &#8203; Over 300K copies sold Over 1,000 5***** Star Reviews FROM THE NEW YORK TIMES BEST SELLING AUTHOR OF THE HARBINGER , THE MYSTERY OF THE SHEMITAH, THE BOOK OF MYSTERIES , AND THE PARADIGM WITH OVER 3 MILLION COPIES SOLD This May Be the Most Explosive and Amazing Thing You've Ever Read Is it possible that there exists an ancient master blueprint that holds the secret behind the events of our times? Could this blueprint lie behind the rise and fall of leaders and governments? Could events that took place nearly 3,000 years ago now be determining the course of our world and with it the course of our lives? Could ancient figures from the Middle East hold the key to the leaders of our own day, what they do, when they rise, and when they fall? Is it possible that this ancient paradigm has determined not only the events of modern times but also their timing--even down to the exact dates? Could a mystery from the ancient Middle East have foretold the outcomes of current events more accurately than any poll or expert--even the outcomes of presidential elections? Has this mystery even touched the events of your life? Does the paradigm reveal what will take place in the future? And does it contain a warning critical for every person in this generation? Prepare to be stunned, shocked, illuminated, and amazed. The Paradigm will reveal secrets and mysteries taking place all around you and show you what you never could have imagined. Jonathan Cahn, who caused an international stir with his New York Times best-selling book The Harbinger , will take you from the ancient Middle East to the news of the modern world on a journey you will never forget. As you open up The Paradigm , his most explosive book yet, you may never see your world the same way again.

From the front Cover Prepare to uncover the mystery behind your world that will shock and amaze you as you begin a journey of nearly three thousand years, from an arid Middle Eastern landscape to American soil, from ancient palaces to the White House, from ruthless kings and queens to mysterious priests and priestesses, secrets and scandals, idols and gods, prophets and holy men, signs, portents, wonders, and harbingers--as you discover how each of these things holds a mystery that has determined your world and touched your life.