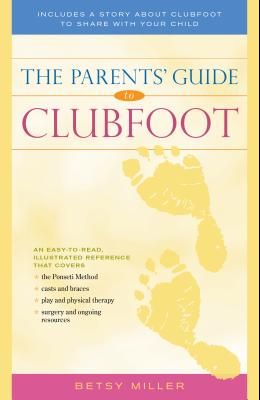 The Parents' Guide to Clubfoot

About one in every thousand babies born each year has clubfoot, a disorder that affects foot and calf muscles. Because treatment usually begins soon after birth and continues for several years, parents play a key role in the treatment of clubfoot and need to be able to communicate effectively with their child's doctor. The Parents' Guide to Clubfoot is the only book about clubfoot that is written for parents so they can learn everything they need to know about their child's condition. It is an all-in-one resource with medical information, advice from parents, comments from clubfoot experts, and even an illustrated story for preschoolers that parents can read aloud to their children. Written in everyday language, the book covers clubfoot in babies and older children from diagnosis through treatment for mild to severe cases. It provides details on clubfoot, its causes, treatment and care, along with an extensive list of resources and clubfoot assessment aids. In keeping with currently preferred treatments in the U.S., it emphasizes the Ponseti method, which minimizes surgery, and includes perspectives from Ponseti-trained clubfoot doctors and parents of children with clubfoot. However, separate chapters discuss all pre-treatment and post-treatment care options and one chapter covers surgery and post-surgery care if it becomes necessary. Parents often have a hard time coping with the diagnosis of clubfoot in their newborn children, and this book reassures them that the condition is treatable. If treated correctly, the child's foot will look normal, and he or she will be fully able to walk, run, and play. Several world-class athletes, including Kristi Yamaguchi, Troy Aikman and Freddy Sanchez, were born with clubfoot. The book includes advice from children with clubfoot that highlights the positive effects of having clubfoot as a child, like getting presents after surgery, and shows active pictures of them after their treatment. As mentioned, the Ponseti method of treatment - once disregarded as quackery - is the most common method of clubfoot treatment in the United States. It involves a series of casts and braces that slowly reposition the foot. To prevent a relapse, these braces need to be worn until the age of four or five. The book provides instruction, advice and tips for caring for a child in a cast, putting on the different braces required for the Ponseti method, and solving common problems like bruising. It also includes a useful list of signs that a child's foot is relapsing. The three most important aspects of the book are: 1. It reassures parents that clubfoot is treatable and that, with the right treatment, their child's foot will look normal and he or she will be able to walk, run, and play. 2. It is important to find a doctor skilled in treating clubfoot with a nonsurgical approach. This is called the Ponseti method after the late Dr. Ponseti, who developed it. 3. Once a child's foot is corrected, following through with brace wear as directed until the age of four or five is the best way to prevent a relapse in which the foot needs to be corrected again.

Books similiar to The Parents' Guide to Clubfoot

List of All Editions of The Parents' Guide to Clubfoot