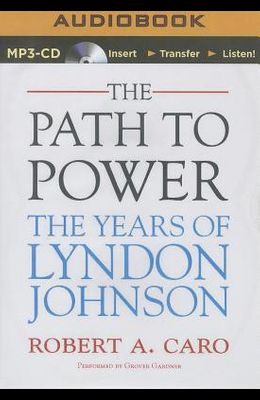 The Path to Power: The Years of Lyndon Johnson

Book #1 in the The Years of Lyndon Johnson Series
by
Robert A Caro and Grover Gardner
$0.00
Select Format

The Years of Lyndon Johnson is the political biography of our time. Here is the perfect joining of subject and writer: Johnson, the man of awesome complexity, energy, ambition, and power--obsessed with secrecy, obscuring (often rewriting) the facts of his personal and political life; Caro, his biographer, was awarded the Pulitzer Prize for his life of Robert Moses, The Power Broker --and everywhere acclaimed for the brilliance, tenacity, and integrity of his research, for his grasp of character and of the workings of power. The conjunction has produced a monumental and galvanizing book that is a landmark in American biography. No president--no era of American politics--has been so intensively and sharply examined at a time when so many prime witnesses to hitherto untold or misinterpreted facts of a life, a career, and a period of history could still be persuaded to speak. The Path to Power --the first book of The Years of Lyndon Johnson --reveals in extraordinary detail the genesis of the almost superhuman drive, energy, and urge to power that set LBJ apart. Chronicling the startling early emergence of Johnson's political genius, it follows him from his Texas boyhood through the years of the Depression in the Texas Hill Country to the triumph of his congressional debut in New Deal Washington, to his heartbreaking defeat in his first race for the Senate, and his attainment, nonetheless, of the national power for which he hungered. We see in him, from earliest childhood, a fierce, unquenchable necessity to be first, to win, to dominate--coupled with a limitless capacity for hard, unceasing labor in the service of his own ambition. Caro shows us the big, gangling, awkward young Lyndon--raised in one of the country's most desperately poor and isolated areas, his education mediocre at best, his pride stung by his father's slide into failure and financial ruin--lunging for success, moving inexorably toward that ultimate impossible goal that he sets for himself years before any friend or enemy suspects what it may be. We watch him, while still at college, instinctively (and ruthlessly) creating the beginnings of the political machine that was to serve him for three decades. We see him employing his extraordinary ability to mesmerize and manipulate powerful older men, to mesmerize (and sometimes almost enslave) useful subordinates. We follow, close up, the radical fluctuations of his relationships with the formidable Mr. Sam Rayburn (who loved him like a son and whom he betrayed) and with FDR himself. And we follow the dramas of his emotional life--the intensities and complications of his relationships with his family, his contemporaries, his girls; his wooing and winning of the shy Lady Bird; his secret love affair, over many years, with the mistress of one of his most ardent and generous supporters.... We see Johnson at once unscrupulous, admirable, treacherous, devoted. And we see the country that bred him: the harshness and nauseating loneliness of the rural life; the tragic panorama of the Depression; the sudden glow of hope at the dawn of the Age of Roosevelt. And always, in the foreground, on the move, LBJ. In preparation for this audiobook, Caro has--through some seven years--immersed himself in Johnson's life and world; has lived in Johnson's Hill Country, has crisscrossed the United States, finding and talking to hundreds of men and women--his boyhood friends and sweethearts, his college classmates and rivals, the men who politicked with him in congressional cloakrooms, the young New Deal aides (among them Corcoran, Cohen, Fortas, Rowe) who helped him rise and rose with him. Here as never before is Lyndon Johnson--his Texas, his Washington, his America--in an audiobook that brings us as close as we have ever been to a true perception of political genius and the American political process.

Frequently Asked Questions About The Path to Power: The Years of Lyndon Johnson

Books like The Path to Power: The Years of Lyndon Johnson

0
|   0  reviews
Did you read The Path to Power: The Years of Lyndon Johnson? Please provide your feedback and rating to help other readers.
Write Review

List of All Editions of The Path to Power: The Years of Lyndon Johnson