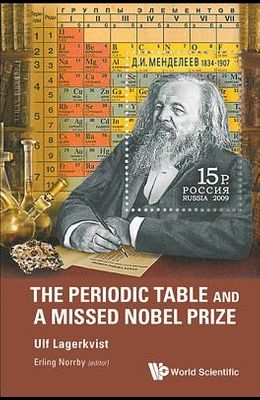 The Periodic Table and a Missed Nobel Prize

In a relatively brief but masterful recounting, Professor Ulf Lagerkvist traces the origins and seminal developments in the field of chemistry, highlighting the discoveries and personalities of the individuals who transformed the ancient myths of the Greeks, the musings of the alchemists, the mystique of phlogiston into the realities and the laws governing the properties and behavior of the elements; in short, how chemistry became a true science. A centerpiece of this historical journey was the triumph by Dmitri Mendeleev who conceived the Periodic Law of the Elements, the relation between the properties of the elements and their atomic weights but more precisely their atomic number. Aside from providing order to the elements known at the time, the law predicted the existence and atomic order of elements not then known but were discovered soon after.An underlying but explicit intent of Lagerkvist's survey is to address what he believes was a gross injustice in denying Mendeleev the Nobel Prize in Chemistry in 1905 and again in 1906. Delving into the Royal Swedish Academy of Sciences' detailed records concerning the nominations, Lagerkvist reveals the judging criteria and the often heated and prejudicial arguments favoring and demeaning the contributions of the competing contenders of those years. Lagerkvist, who was a member of the Swedish Academy of Sciences and has participated in judging nominations for the chemistry prize, concludes It is in the nature of the Nobel Prize that there will always be a number candidates who obviously deserve to be rewarded but never get the accolade -- Mendeleev was one of those.

From the front Cover The history of science offers many examples of how the powers that we have protected and rewarded scientists like alchemists who claimed the ability to make gold. With the advent of the Science Academies in the 17th and 18th centuries, scientists were supported and encouraged with stipends and rewards. However, when Alfred Nobel in his will made the Royal Swedish Academy of Sciences the custodian of the Nobel Prizes in physics and chemistry, the evaluation of the candidates for the prizes sometimes led to strong differences of opinion within the Academy. This book deals with such a case Dmitri Mendeleev and his Periodic Law. Here, this book presents the deliberations of the Academy (and its sometimes rather confused Chemistry Nobel Committee) against the background of the scientific development preceding the discovery.