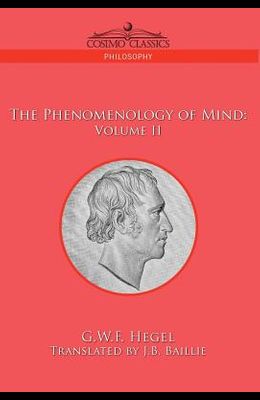 The Phenomenology of Mind: Volume II

by
Georg Wilhelm Friedrich Hegel and J B Baillie

A sweeping investigation of how knowledge is obtained by means of absolute truth, including how the spirit reveals itself as absolute reality, The Phenomenology of Mind is an intellectual tour-de-force and represents a great philosophical works for the ages. Originally published in English in 1910, Hegel proffers his unique viewpoint that knowledge is not separated from, nor outside of, absolute reality - but that knowledge is itself reality, and posits that reality is mental and spiritual. Volume II includes: . The Nature of] Free Concrete Mind: Spirit . Religion in General . Absolute Knowledge Also Available from Cosimo Classics: Hegel's The Phenomenology of Mind: Volume I German philosopher GEORG WILHELM FRIEDRICH HEGEL (1770-1831) was born in Stuttgart and studied at T bingen, where his contemporaries included Schelling and the poet H lderlin. As a philosophical disciple of Kant, Hegel was of the Idealist School of philosophers and remained an unparalleled influence on German philosophy throughout the 19th-century. Additional works by Hegel's include: The Objective Logic (1812-13), The Subjective Logic (1816), Encyclopedia of the Philosophical Sciencies in Outline (1817), and Philosophy of Right (1821).