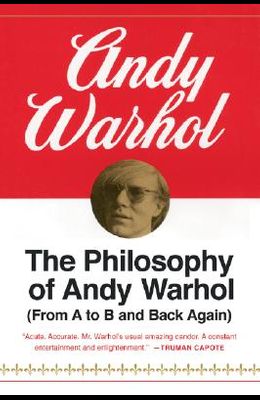 The Philosophy of Andy Warhol: From A to B and Back Again

A loosely formed autobiography by Andy Warhol, told with his trademark blend of irony and detachment In The Philosophy of Andy Warhol --which, with the subtitle (From A to B and Back Again), is less a memoir than a collection of riffs and reflections--he talks about love, sex, food, beauty, fame, work, money, and success; about New York, America, and his childhood in McKeesport, Pennsylvania; about his good times and bad in New York, the explosion of his career in the sixties, and his life among celebrities.

From the Back Cover Andy Warhol claimed that he loved being outside a party so that he could get in. But more often than not, the party was at his own studio, the Factory, where celebrities from Edie Sedgwick and Allen Ginsberg to the Rolling Stones and the Velvet Underground gathered in an ongoing bash. In The Philosophy of Andy Warhol the enigmatic Warhol makes the reader his confidant on love, sex, food, beauty, fame, work, money, success, and much more. * Andy on love: People should fall in love with their eyes closed. Just close your eyes. Don't look. * Andy on beauty: I really don't care that much about 'Beauties.' What I really like are Talkers. * Andy on money: It's always good to get abstract when it comes to economics. * Andy on class: The rich have many advantages over the poor, but the most important one, as far as I'm concerned, is knowing how to talk and eat at the same time. * Andy on underwear: I would rather watch somebody buy their underwear than read a book they wrote. Andy Warhol (1928-1987), a painter and graphic artist, also produced a significant body of film work, including his famous Chelsea Girls. Equally well known in the late sixties and early seventies as resident host at his studio, the Factory, Warhol died in New York in 1987.