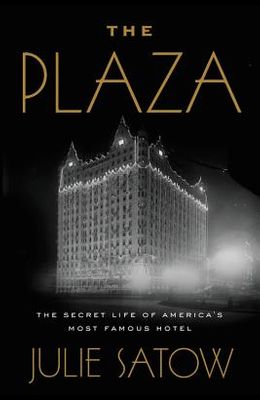 The Plaza: The Secret Life of America's Most Famous Hotel

Award-winning New York Times real estate reporter Julie Satow's inside history of how one iconic property has defined our understanding of wealth and glamour for a century. From the moment Alfred Gwynne Vanderbilt walked through the Plaza's revolving doors to become its first guest in 1907, the 18-story white marble edifice at the corner of Fifth Avenue and 59th Street has radiated wealth and luxury. Yet its pristine fa ade also hid dark secrets, including a brutal union fight on the hotel's still-unfinished eighth floor, which took place just months before Vanderbilt's entrance, leaving a man dead. THE PLAZA tells the unforgettable story of one vaunted New York City address that has become synonymous with wealth and scandal, opportunity and tragedy. For some, the hotel evokes images of F. Scott Fitzgerald frolicking in the Pulitzer Fountain, or Eloise, the impish young guest who pours water down the mail chute. But the true story of THE PLAZA also includes the legal and financial saga that saw the building through nearly a dozen owners, including a disgraced Indian tycoon who ran the hotel from a prison cell, and Conrad Hilton and Donald Trump, who cannily leveraged its exalted address for their own self-aggrandizement. In a sprawling, character-driven narrative, Julie Satow details long-forgotten anecdotes and newly-discovered tales about the rich and pedigreed, including the beautiful ingenue who shocked at Truman Capote's Black and White Ball, how wealthy dowager widows once saved the hotel, and celebrities from Frank Lloyd Wright to Eddie Murphy to a shogun from Japan. Drawing on hundreds of interviews to follow the trail of money that flowed through the hotel from its inception to today, this immersive work of reporting examines the role of New York real estate in the U.S. and the global economy. THE PLAZA exposes how foreign money and anonymous shell companies have transformed the hotel's iconic rooms into condominiums purchased to shield ill-gotten gains -- hollowing out parts of the hotel as well as the city around it. THE PLAZA not only entertains, it reveals for the first time how the illustrious property became a mirror reflecting New York's place at the center of the country's cultural narrative, from era to era. It is the story of glamour on the surface and strife behind the scenes, and the authoritative account of how one hotel defined a century.