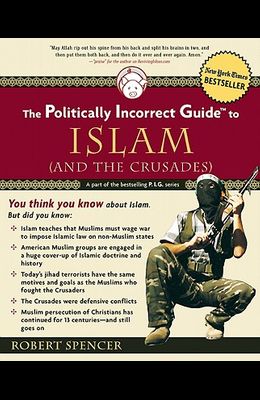 The Politically Incorrect Guide to Islam (and the Crusades)

The courageous Robert Spencer busts myths and tells truths about jihadists that no one else will tell. -- MICHELLE MALKIN While many choose to simply blame the West for provoking terrorists, Robert Spencer's new book The Politically Incorrect Guide to Islam (and the Crusades) (TM) reveals why it is time to ignore political correctness and identify the enemy - if we hope to ever defeat them. In a fast-paced, politically incorrect tour of Islamic teachings and Crusades history, Spencer reveals the roots of Islamic violence and hatred. Spencer refutes the myths popularized by left-wing academics and Islamic apologists who justify their political agendas with contrived historical facts. Exposing myth after myth, The Politically Incorrect Guide to Islam (and the Crusades) (TM) tackles Islam's institutionalized mistreatment of non-Muslims, the stifling effect Islam has on science and free inquiry, the ghastly lure of Islam's X-rated Paradise for suicide bombers and jihad terrorists, the brutal Islamic conquests of the Christian lands of the Middle East and North Africa, and more. In The Politically Incorrect Guide to Islam (and the Crusades) (TM) , you will learn: How Muhammad did not teach peace and tolerance--instead he led armies and ordered the assassination of his enemies Why American Muslim groups and left-wing academics are engaged in a huge cover-up of Islamic doctrine and historyHow today's jihad terrorists following the Qur'an's command to make war on Jews and Christians have the same motives and goals as the Muslims who fought the Crusaders Why the Crusades were not acts of unprovoked aggression by Europe against the Islamic world, but a delayed response to centuries of Muslim aggression What must be done today--from reading the Qur'an to reclassifying Muslim organizations--in order to defeat jihad terrorists