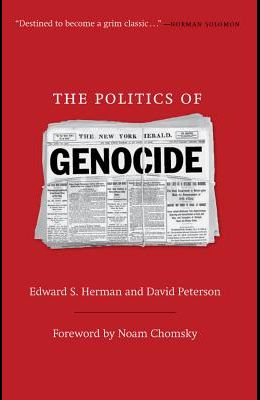 The Politics of Genocide

by
Edward S Herman and David Peterson and Noam Chomsky

In this impressive book, Edward S. Herman and David Peterson examine the uses and abuses of the word genocide. They argue persuasively that the label is highly politicized and that in the United States it is used by the government, journalists, and academics to brand as evil those nations and political movements that in one way or another interfere with the imperial interests of U.S. capitalism. Thus the word genocide is seldom applied when the perpetrators are U.S. allies (or even the United States itself), while it is used almost indiscriminately when murders are committed or are alleged to have been committed by enemies of the United States and U.S. business interests. One set of rules applies to cases such as U.S. aggression in Vietnam, Israeli oppression of Palestinians, Indonesian slaughter of so-called communists and the people of East Timor, U.S. bombings in Serbia and Kosovo, the U.S. war of liberation in Iraq, and mass murders committed by U.S. allies in Rwanda and the Republic of Congo. Another set applies to cases such as Serbian aggression in Kosovo and Bosnia, killings carried out by U.S. enemies in Rwanda and Darfur, Saddam Hussein, any and all actions by Iran, and a host of others. With its careful and voluminous documentation, close reading of the U.S. media and political and scholarly writing on the subject, and clear and incisive charts, The Politics of Genocide is both a damning condemnation and stunning expos' of a deeply rooted and effective system of propaganda aimed at deceiving the population while promoting the expansion of a cruel and heartless imperial system.