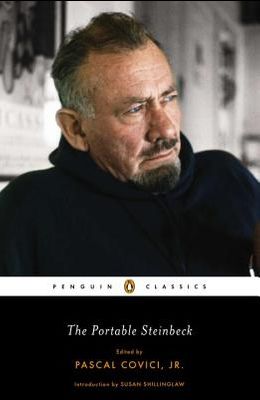 by
John Steinbeck and Pascal Covici and Susan Shillinglaw

A selection of essential writings by one of the greatest writers in American history It would be impossible to overstate John Steinbeck's enduring influence on American letters. Profuse with a richness of language, sly humor, and empathy for even his most flawed characters, Steinbeck's books are still widely read and deeply relevant today. The Portable Steinbeck is a grand sampling of his most important and popular works. Here are the complete novels Of Mice and Men and The Red Pony, together with self-contained excerpts from several longer novels, the text of his Nobel Prize acceptance speech, a fascinating introduction by Pascal Covici, Jr., son of Steinbeck's longtime editor, and brand new introduction from leading Steinbeck scholar Susan Shillinglaw that puts Steinbeck in the context of the 21st century. For more than seventy years, Penguin has been the leading publisher of classic literature in the English-speaking world. With more than 1,700 titles, Penguin Classics represents a global bookshelf of the best works throughout history and across genres and disciplines. Readers trust the series to provide authoritative texts enhanced by introductions and notes by distinguished scholars and contemporary authors, as well as up-to-date translations by award-winning translators.