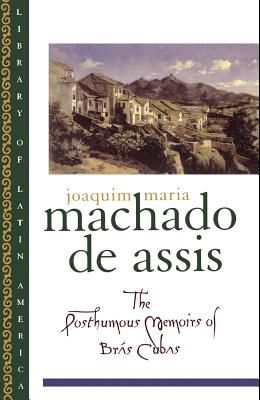 The Posthumous Memoirs of Brás Cubas

Be aware that frankness is the prime virtue of a dead man, writes the narrator of The Posthumous Memoirs of Br&#65533;s Cubas . But while he may be dead, he is surely one of the liveliest characters in fiction, a product of one of the most remarkable imaginations in all of literature, Brazil's greatest novelist of the nineteenth century, Joaquim Maria Machado de Assis. By turns flippant and profound, The Posthumous Memoirs of Br&#65533;s Cubas is the story of an unheroic man with half-hearted political ambitions, a harebrained idea for curing the world of melancholy, and a thousand quixotic theories unleashed from beyond the grave. It is a novel that has influenced generations of Latin American writers but remains refreshingly and unforgettably unlike anything written before or after it. Newly translated by Gregory Rabassa and superbly edited by Enylton de S&#65533; Rego and Gilberto Pinheiro Passos, this Library of Latin America edition brings to English-speaking readers a literary delight of the highest order.