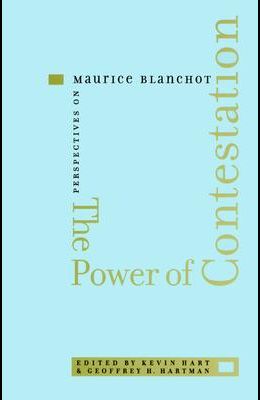 The Power of Contestation: Perspectives on Maurice Blanchot

by
and Kevin Hart and Geoffrey H Hartman
$0.00
Select Format

One of the first French intellectuals to take a systematic interest in questions of language and meaning, Maurice Blanchot (1907-2003) substantially influenced such thinkers as Deleuze, Foucault, Barthes, Levinas, and Derrida. Until recently, Blanchot's work remained largely unknown outside France, in part because of its complexity and in part because Blanchot shunned intellectual celebrity. Over the past decade, however, nearly all of Blanchot's books have been translated into English, and worldwide interest in his fiction, cultural criticism, and philosophy has increased dramatically. Kevin Hart and Geoffrey H. Hartman bring together essays by prominent scholars from a range of disciplines to focus on Blanchot's diverse concerns: literature, art, community, politics, ethics, spirituality, and the Holocaust. The volume takes its title from Blanchot's idea that literature is a power of contestation: contestation of the established power, contestation of what is..., contestation of language and of the forms of literary language, finally contestation of itself as power. Tracing this concept as a central theme of Blanchot's writings, and exploring its scope and ambiguity, the contributors bring this seminal, but formidably difficult, intellect into sharper focus. Contributors: Gerald L. Bruns, University of Notre Dame; Leslie Hill, University of Warwick; Michael Holland, St Hugh's College, Oxford; Philippe Lacoue-Labarthe, University of Strasbourg; Vivian Liska, University of Antwerp; Jill Robbins, Emory University, and the editors. --Gerald Prince, University of Pennsylvania

Frequently Asked Questions About The Power of Contestation: Perspectives on Maurice Blanchot

0
|   0  reviews
Did you read The Power of Contestation: Perspectives on Maurice Blanchot? Please provide your feedback and rating to help other readers.
Write Review

List of All Editions of The Power of Contestation: Perspectives on Maurice Blanchot